“ ‘. . . for even in the last century, realism made such strides that we can no longer endure it! I’ve even heard that a certain Courbet, at one of his last exhibitions, showed himself, face to the wall, in the performance of one of the most hygienic but least elegant actions of life! Enough to scare away Zeuxis’s birds!’ ” 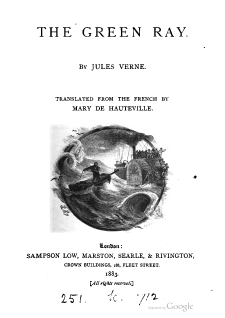 I found Jules Verne’s The Green Ray, as I suspect most of this book’s readers are now found, through Rohmer’s film of the same name. It’s been a long time since I read Verne, if I ever did – possibly the editions of Voyage to the Center of the Earth and so on that I remember reading as a child weren’t actually his work at all. The Green Ray seems to have been mostly forgotten, though there’s no shortage of cheap new editions on Amazon. Google has a copy of an 1883 edition: it’s a short book & not hard to read on a screen.

The first few paragraphs of Chapter I, “The Brothers Sam and Sib,” promisingly seem to prefigure the Hardy Boys:

“Betty!”
“Bess!”
“Betsey!”
One after another these names re-echoed through the hall of Helensburgh; it was the way the brothers Sam and Sib had of summoning their housekeeper.”

“Sib” isn’t quite right as a name, of course: it feels a little too meta, though we soon learn that it’s actually short for “Sebastian”. And the single-sentence paragraph after next sends the reader rushing to the dictionary, suspecting all is not right with Google’s scan: “It was Partridge the factor, who with his hat in his hand, made his appearance at the hall-door.” A factor is, exactly as you might expect, a “doer or agent”, as the OED‘s first definition has it.

Sam and Sib Melville, “Scotchmen of the old school,” are uncles of the eighteen-year-old orphan Helena Campbell, as much the Thompson and Thomson of Tintin as the Hardy Boys:

For her sake they remained celibates, being of that number of estimable persons whose earthly career is one long course of self-denial. And does it not say much for them when the elder brother constituted himself father, and the younger one mother to the child, so that it came quite naturally to Helena to address them with,—
“Good morning, Papa Sam. How are you, Mamma Sib?”

Sam & Sib are trying to marry off Helena, hopefully to someone with the fine name of “Mr. Aristobulus Ursiclos”; with a name like that he is cursed to be a popinjay. But Helena refuses to be married until she has seen the green ray. In Verne’s Scotland, the green ray “has the virtue of making him who has seen it impossible to be deceived in matters of sentiment; at its apparition all deceit and falsehood are done away, and he who has been fortunate enough once to behold it is enabled to see closely into his own heart and read the thoughts of others” (p.33). (This is, more or less, the precis of the book delivered in Rohmer’s film.)

There’s a lack of suspense in this book: really, most of the time is spent maneuvering the characters into such a place where they can see an unobstructed sunset over water, which turns into a general tour of the western coast of Scotland while they try to find a view that is not blocked by other islands, or sailboats, or clouds. There’s a croquet party, which has been fixed to let Sam & Sib win; nonetheless, it drags on and on, eventually providing the pretext for meeting Oliver Sinclair, painter and naval hero, who is clearly a more suitable match than Aristobulus. Helena and Oliver have conversations like this:

“Ah! Mr. Sinclair, I am like you, passionately fond of our archipelago! it is magnificent, especially when lashed by the fury of tempests.”
“It is indeed sublime,” replied Oliver Sinclair. “There is nothing on the way to obstruct the violence of the gales which vent their force here after travelling three thousand miles! The American coast faces Scotland, and though great storms may rise there, it is the western coast of Europe which gets the first benefit of their fury! But what can they do against our Hebrides, which are not like that man of whom Livingstone speaks, who had no fear of lions, but was afraid of the sea? These isles, with their solid granite bases, can laugh to scorn the violence of wind and sea.”
“The sea! A chemical combination of hydrogen and oxygen with two and a half per cent. of chloride of sodium! Indeed, nothing can be more sublime than the violent agitations of chloride of sodium!” (p. 180)

There’s a lot of excitement in this book. It can be hard to tell how to read this: the last speech there is an interjection by the scientifically-minded Aristobulus, who is determined to put an end to Oliver and Helena’s fledgling romance, and possibly is intended to be funny, but it seems of a piece with the previous exclamations on the beauty of everything. When they reach Iona, Aristobulus becomes an iconoclast in the name of geology: 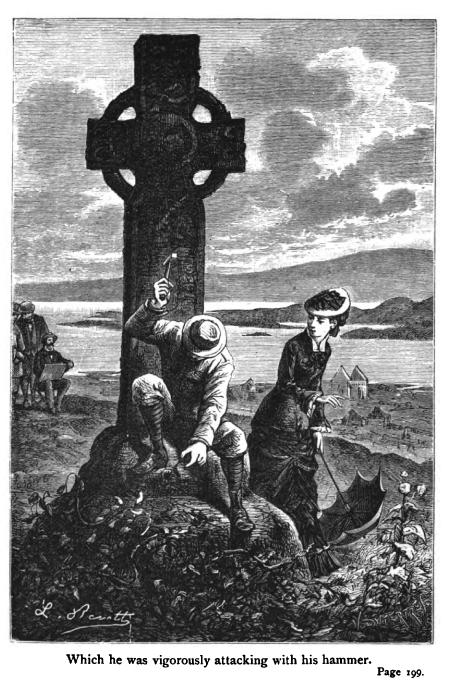 “I am by no means an iconoclast,” he tells the disapproving Helena, “but a geologist, and as such I am anxious to know the nature of this stone.”) Science frequently gets in the way of the sublime. It’s unclear quite why Aristobulus should be so villainous; there’s a profit motive, as Sam and Sib have a fortune that will be passed on, but Aristobulus betrays no interest in this. He is quite simply an enemy of the good, denying, for example, that eyes can smile (no Facial Action Coding System for him), that ghosts and fairies might exist, or the charms of Ossian “whose genius united poetry and music” and who is quoted with loving repetition. “Mr. Ursiclos will spoil my Green Ray with his explanation,” complains Helena. The narrator, however, is more than happy to insert digressions into the geology of caves around the world: a time and a place for everything, perhaps.

A climax is concocted: Oliver saves Helena from tidal misadventure in Fingal’s Cave. One is impressed with how well the illustration of the cave accords with the photographs in Wikipedia from the same perspective: 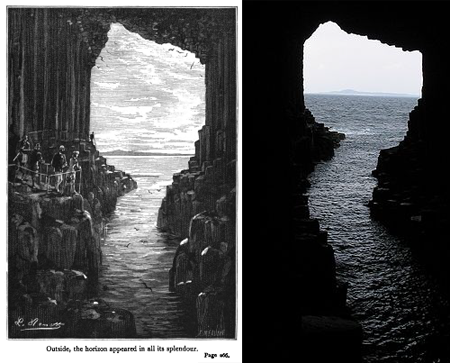 Helena swoons; she is rescued. The scene is set for the finale: Aristobulus has been left on Iona, Helena and Oliver are in love. Oliver, now a hero, is fine with Sam and Sib. They might finally see the green ray if Helena has recovered from her ordeal. Nothing blocks the view; and finally, the green ray is seen by the brothers and the servants. Helena and Oliver are too busy looking into each other’s eyes to notice.

Verne’s The Green Ray isn’t particularly good: one can see that it would have once had value as a travelogue of Scotland, but as fiction it is sorely disappointing. It’s interesting, then, that it can be used to such good effect in Rohmer’s Le rayon vert: perhaps because it’s the idea of the book, rather than the book itself, which comes into play. Delphine, the heroine, has almost certainly not read The Green Ray when she hears people talking about it. (This clip, with Spanish subtitles, is the book’s complete appearance in the film.) The old people discussing the book admit they thought it boring; but now they find it fascinating as a story of love, the idea of trying to find something almost impossible to actually see. Then an old man, the incarnation of Aristobulus Ursiclos, explains to everyone exactly what the green ray is. (Should you like your Green Ray spoiled with explanation, see Wikipedia, which insists that the phenomenon should be called a “green flash” rather than a “green ray.”)

The idea of The Green Ray is more interesting than the book itself; and when Delphine finally ends her slump by allowing a man to approach her, he does so ostensibly because of what she’s reading, Dostoyevsky’s The Idiot, which she seems to have nearly finished. Later, she is reminded again of the green ray by a shop with that name; she tells the man what she’s heard about the book, asking him if he’s read it – he hasn’t – but not revealing whether or not she’s read it, though she gives the impression of that. Rohmer rather miraculously manages to capture the green ray on film: perhaps it’s appropriate that it doesn’t show through the graininess of a YouTube clip of the movie’s ending: