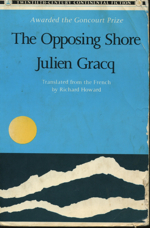 This novel is one I that I return to; this is my third time through. Julien Gracq was one of the writers the Surrealists wanted but they couldn’t get (like Roussel and De Chirico); his work shares something with their aesthetic, but it’s very much his own. This particular novel hasn’t attracted much attention in English; Columbia released it in 1986, Harvill seems to have put out a British edition in the late 1990s, and since then nothing. The Pushkin Press has been reissuing out-of-print editions of Gracq (most recently A Dark Stranger; Turtle Point Press has been very slowly publishing untranslated works by Gracq. This book has so far been left out; it’s a shame, because it’s one of his most accessible works.

When Gracq published the novel in 1951, it was given the name Le rivage des Syrtes; I don’t know whether the change of the English title was Richard Howard’s or not, but it’s an odd one. “Syrtes” in the novel is the southern-most region of Orsenna, a country that seems to be a stand-in for a pre-Risorgimento Italy where there seem to be cars but no electricity, ruled by a city of the same name which seems to be, but isn’t quite, Venice. Almost all the characters in the novel have Italian names. There isn’t an exact correspondence: Venice still exists in the novel, and the Catholic church is present but inwardly directed and apolitical. Orsenna has been at war almost indefinitely with Farghestan, the desert country across the sea to the south; Farghestan, with its two main cities on the coast and endless deserts seems a great deal like Libya. There have been symbolic exchanges in Gracq’s book: Mount Etna moves to Libya and becomes the Tängri; the ruins of Sabratha leave Libya for Italy and become Sagra, where spies from Farghestan enter the country of Orsenna. And of course Sirt goes to Italy and becomes Syrtes.

Which brings us back to the name of the novel: “Sirt” (in French “Syrte,” in Arabic “سرت”) is the name of both a town in Libya (most prominent now as the birthplace of Qaddafi) and a gulf directly north of it, the Gulf of Sidra (the Arabicized version of the Latin Syrtis Major). Gracq’s choice to write about a conflict between Italy and Libya is not as disinterested as it might seem: from 1911 to 1943, Libya had been an Italian colony; Libya become independent in 1951. Mussolini declared Libya to be Italy’s fourth shore (the Quarta Sponda); his bloody history in Libya is by and large forgotten, but he was busy using tanks against civilians, setting up concentration camps, and building a 168-mile-long barbed wire fence to control an insurgency; maybe half the population of Cyrenaica died under Italian occupation. F. T. Marinetti and the Futurists rushed out manifestoes in favor of the war on Libya; Marinetti went to go see the bombardment of Tripoli as a correspondent for the French press.

How then should Gracq’s novel be read? Generally this book is presented as being in the tradition of Kafka, like Dino Buzzati’s The Tartar Steppe, with which it shares a premise; certainly the French title of Gracq’s book can simply be read as a pun. It’s entirely possible, maybe even likely, that I’m reading too much into this book. Politically, it’s hard to charge Gracq with anything: he split with the Communists on the point of the Stalin-Hitler pact and was thereafter uninvolved. Gracq did, however, teach history and geography: presumably, he knew exactly what he was doing with his allusions to Libya.

Farghestan, in the end, is purposefully unreal: the “secret powers of the city” that Aldo discovers when he leaves Syrtes for Orsenna are using the pretense of a war with Farghestan to whip up nationalist patriotism. Aldo, the protagonist, realizes that he’s been used, both by his lover and by the state; Danielo, one of the masters of Orsenna, explains how Aldo’s actions have proven useful:

When you rule, nothing is worse than losing hold. Once the Thing came to me, it was a strange discovery to realize that this was the only way to hold on to Orsenna. Everything that focused on Syrtes again,everything that led to the renewal of your . . . episode made the old gears turn with almost phantasmagorical ease, everything that failed to concern it met with a wall of inertia and unconcern. The Thing took advantage of every instance – the gestures to accelerate it and the gestures to slow it down – like a man sliding down the slope of a roof. Once the question was raised – how can I put this to you? – everything was mobilized of its own accord. (p. 284)

Orsenna, the final chapter makes clear, is about to descend into fascism: war with Farghestan, however, unlikely, is a convenient excuse. A deep dreaminess pervades this book, maybe the reason I find myself coming back to it; the politics, however, remain as timely as ever.