“A friend tells me: ‘Any plan to alternate poems with prose is suicide, because poems demand an attitude, a concentration, even an alienation completely different from the mental attunement required for prose, so your readers will have to be switching voltage every other page and that’s how you burn out lightbulbs.’

Could be, but I carry on stubbornly convinced that poetry and prose reciprocally empower each other and that alternating readings won’t do any harm. In my friend’s point of view I detect once again that seriousness that tries to place poetry on a privileged pedestal, which is why most contemporary readers can’t get far enough away from poetry in verse, without on the other hand rejecting what reaches them in novels and stories and songs and movies and plays, a fact which suggest a) that poetry has lost none of its deep power but that b) the formal aristocracy of poetry in verse (and above all the way poets and publishers package and present it) provokes resistance and even rejection on the part of many readers otherwise as sensitive as anyone else to poetry. . . .” 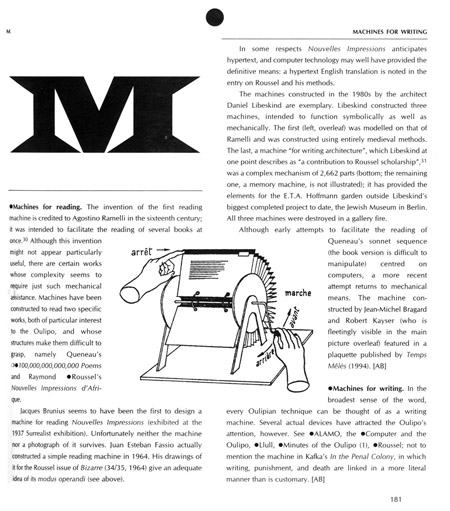 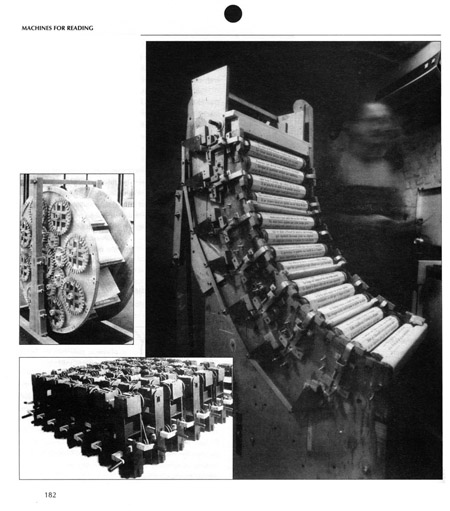 (pp. 181–2 in the new edition of the Oulipo Compendium. Cortázar’s mention of Fassio; Fassio’s machine for reading Hopscotch.)

“Serious critics, of course, know that none of this is possible: in the first place, the Lyncée is an imaginary ship; secondly, Duchamp and Roussel never met. (Duchamp relates that he saw Roussel only once, in the Café La Régence, the one in the poem by César Vallejo, and that the author of Locus Solus was playing chess with a friend. ‘I am afraid I neglected to introduce myself,’ adds Duchamp.) But others do not allow these physical difficulties to obscure the truth of a more worthy reality. Not only did Duchamp and Roussel make the journey to [Buenos Aires] but they also met an echo from the future there, linked to them in ways that serious critics would likewise fail to credit. Juan Esteben Fassio prepared the ground by inventing in the heart of Buenos Aires a machine for reading the New Impressions of Africa during the same period when I, without knowing him, wrote Persio’s first monologues in The Winners, using a system of phonetic analogies inspired by Roussel; years later, Fassio attempted to fashion a new machine for reading Hopscotch, unaware that my most obsessive work during those years in Paris was with the obscure texts of Duchamp and the works of Roussel. A double impulse gradually converged upon the austral vertex where Roussel and Duchamp would meet once again in Buenos Aires, when an inventor and a writer – who perhaps years earlier had also watched each other across a cafe in the heart of the city, neglecting to introduce themselves – would meet through a machine conceived by the first to facilitate the reading of the second. If the Lyncée navigated the coasts of Africa, still some of its passengers reached our American shores, and the proof is in what follows, a short of joke designed to lead astray those who search for treasure with solemn faces.”

(Julio Cortázar, from “Of Another Bachelor Machine,” pp. 53–4 in Around the Day in Eighty Worlds.) 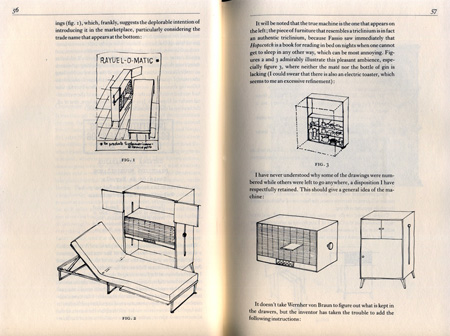