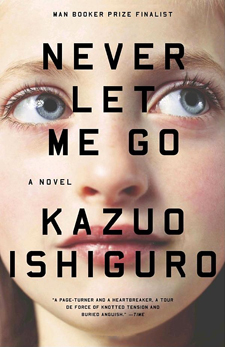 The last time I read Kazuo Ishiguro was in high school, when something possessed me to read not only The Remains of the Day (probably found at some relative’s house) but also An Artist of the Floating World (presumably found at the local library). I don’t remember what I thought of them; by the time The Unconsoled came out, I was in college and interested in other things. When Never Let Me Go came out, I mentally classified it as one of those books that doesn’t need to be bought because you’re bound to find a copy in other people’s houses where it will be the only thing worth reading over a long boring weekend#160;– to this day I have not read Middlesex because of exactly the same reasoning – and six years later I find myself in just such a situation. I did see, I should admit, a decent chunk of the movie version of this on the back of a neighbor’s seat on a long flight to somewhere recently; it seemed pretty, but I can’t say that I remember anything from it.

The first thing that is strange about this book is the type, which is Bembo Schoolbook. This is a standard Bembo with a couple of weird variations: there’s a single-story lowercase “a”, for example, and the descenders of the “g” and “y” are similar, simple curves. The effect is oddly dizzying: you look at a page of the book and it’s clear that something is wrong, though it’s not immediately clear what. The strangeness goes away when reading, of course. It’s hard to tell what the desired effect is supposed to be: the name of the type suggests its intended function, to be easy for children to read, though it’s entirely unclear that the standard Roman “g” is more difficult to read that a “g” without the bottom loop. Perhaps this is a simple joke: this is a book about a school, so the type should look like it’s from a school. This isn’t what ends up happening: Bembo Schoolbook doesn’t look handwritten at all. Mostly it looks exactly like Bembo, a face most familiar for its common use in books. If the context of a school was intended, more direct ways could be imagined. Rather than child-like, the modified characters come across as strange, almost jolting; as previously noted, something seems wrong. There’s maybe something to be said for this. (The book designer, it should be noted, was Iris Weinstein; I haven’t seen anything she might have said about the design of this book, but I haven’t looked as deeply as I might.)

The second thing that’s odd about this book is the genre. It’s rather straightforwardly science fiction in content: young people who are raised as clones in a Britain that is parallel to ours, but that differs in having evidently developed cloning technology in the 1950s; there’s a rather rigidly worked-out system of how some clones are donors, who seem to donate organs four times, and others are carers, who care for the donors in some way. The economic superstructure that undergirds such a system is left untouched (there’s very little money in this book); nor is any moral debate that might have taken place. The back of the book doesn’t indicate that the book is science fiction, but this is clear to the reader from the first paragraph, which wields the words “carer” and “donor” in such a way to make it clear that this world functions differently than our own. After the dedication of the book, a blank page contains the inscription “England, late 1990s” which should make it clear that while this may be England, it’s not the 1990s that we lived through. The copyright page, however, thoughtfully includes Library of Congress classifications for the book, supplied by the publisher: there we learn that this book is about “1. Women—Fiction. 2. England—Fiction. 3. Cloning—Fiction. 4. Organ donors—Fiction. 5. Donation of organs, tissues, etc.—Fiction.” It’s strange how emphatically this book is set up not to be science fiction.

Formally, this is a straightforward book. The first chapter, set in the novel’s present, sets up something of a mystery (what do these terms mean? how do these characters relate?); the second flips back to the beginning of the story (the childhood of the characters) and things progress chronologically from there; by the end of the novel, we’re caught up to the first chapter, which can now be read and understood. The story is told in the first person; there’s an interlocutor who appears occasionally as a “you” to whom the book is addressed (“I don’t know how it was where you were,” p. 13), and who we can assume is a fellow clone to whom the narrator, Kathy B., is narrating the story. Kathy B. is a carer, and presumably she is telling this story to a nameless donor. There’s a gesture at emotion here: we can presume then that this is a story told to someone who is suffering to alleviate pain. But this isn’t really followed up on: references to “you” drop off sharply after the beginning of the book, and it feels almost like a convenient excuse for a first-person narrative; the story told is about the narrator, not the person listening to it. The form of the narrative, it goes almost without saying, is purely literary: we’re under no illusions that we’re actually listening to someone telling a story.

The question of whether this book is a work of science fiction matters because the overwhelming idea of this book is fatalism. No one has any real control over what happens to them: though the clones are born into a life that will be full of suffering, there’s never any real attempt to look outside that system. Suicide, weirdly, is never an option: instead, everyone seems to imagine it best that they might go to their deaths with their sufferings ameliorated in different fashions. (Much of the book has to do with a school in which the main characters are brought up, which is revealed to be a progressive attempt at providing a humane setting for people bred to be slaughtered: a good deal could be written, and maybe has been written, about this book and the politics of food.) For a period, the characters are reading Joyce and Kafka and Tolstoy: the ideas of those writers never really come into play – though this book might be seen as an extended riff on “In the Penal Colony” – perhaps this is to suggest that the characters in this book have no more autonomy than fictional creations.