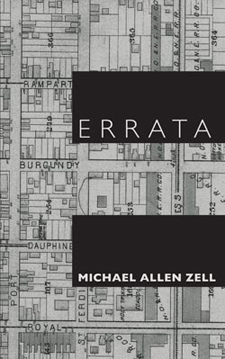 The end of the year is in sight, and with it the urge to clean up everything left undone. I’ve done a poor job of writing about my reading here, largely from lack of leisure; but I also haven’t felt compelled by that many books this past year. This one probably goes on that short list. Errata arrived in the mail as comb-bound ARC some time over the summer, chiefly notable for how amateurish it looked. I’m not sure why I received the book, as I’d never taken notice of Lavender Ink’s books (although Bill Lavender did pop up in the news shortly thereafter); but I put the book in my bag and, after a while, ended up looking at it while on a cross-town bus delayed in traffic, hoping that I could decide that it wasn’t worth bothering with, toss it, and thus accomplish something with what seemed to be a wasted day. The book, it soon became clear, was interesting; the alternating alliterations of cs and vs in a sentence on the first page was enough to stop and take notice:

I crave calming veins of vicarious titillation, the caricature of civilization kept viciously certain by every scanner burst, its randomness cutting through this vexing cloister. (p. 7)

There’s prolixity there, maybe worrying, but controlled rhythm as well, so I read to the next page, where there was a smart consideration of Nabokov, discovered that page to be the end of the first chapter already; a second chapter, almost as short, started the narrative again and revealed the name of the narrator to be Raymond Russell. There wasn’t much that I could do to stop myself at that point; and this is a short book. I don’t think that I was stuck on public transportation that day long enough to read the whole thing, though that’s not outside of the realm of possibility.

What happens in this book is easily laid out: the bookish narrator drives an unlicensed cab in New Orleans in late 1984. He becomes involved, glancingly, in the life of a woman, Hannah Spire; they are mixed up in the death of a corrupt police officer, the Pelican. The book’s twenty-two chapters are subsequent attempts at writing what happened for posterity. The story is simple (though with nice details); but it’s how the story is written (or, as the narrator announces, “how I’ll tell the story around the story”) that makes this book especially worthwhile. Zell’s literary references deserve special: the book swims in Bruno Schulz, Guillermo Cabrera Infante, Herman Melville, Josef Váchal, tools that the narrator uses to think through the problem of addressing his problem. His house is slowly sinking; he props up the foundation with stolen and read books, almost an image of Neurath’s boat. Harry Mathews pops up – this book is related to The Journalist – as does Mallarmé’s Livre and Valéry’s style of dialogue. Roussel is hiding in the background, making the occasional appearance:

More recently, I’d also been told rumors from faves about the 5th District cop who literally pistol-whipped out the teeth of neighborhood men, collected them, and then, referring to his nickname Half and Half, wrote 1/2 as a teeth mosaic in the dirt of empty lots by their sidewalks to remind the residents of his brutality. A civil servant who wore his ethics the way buildings wear rain. (pp. 45–6)

Textual puzzles litter the book. One of the epigraphs, for example, comes from a “P. Reyval”; rearranging the letters reveals Valéry, the reason the quote seems familiar; but on scrutiny, what P. Reyval says is rearranged from what Valéry said. The reader is rewarded for paying attention, though there’s also easy pleasure to be had from the surface of the book. Consider this paragraph-long discussion of Melville and facial hair:

Many men have many minds, so shouldn’t many men also be permitted an assorted masquerade ability to wear several varieties of facial hair or none? The first clause of the preceding sentence references a chapter title from The Confidence Man by Herman Melville, which is appropriate because his writing wasn’t always appreciated throughout his lifetime, but his beard certainly was and is, what with the iconic photographs of the bearded Melville remaining his prevailing visual impression. He knew the power of sporting one’s own Spanish moss during an exceptionally hairy era, using over two dozen different words or phrases of beard description in the novel White Jacket, published when he was barely into his 30’s and his writing career was waning, requiring him to pursue another line of work. (pp. 33–34)

Excerption doesn’t quite show how beautifully this paragraph’s precise deployment of trivia wraps up the narrator’s discussion earlier in the chapter of his own problems with work and shaving as a correlative for that; it foreshadows a point later in the book where the narrator becomes a beard. The Confidence Man hangs over the book; we are reminded that the steamship in that book is sailing for New Orleans.

In a sense Zell’s novel is perfectly common: a literary young man attempts to explain a story with reference to his personal history, his reading, and his education. It’s told in the first person. But this is a book which is always deeply conscious that it is a book, and that the act of writing is fundamentally at odds with living:

Life is not a document. Life cannot be documented. Documents cannot be lived. The writing process is at odds with reconciling life and living sensibly. All I can do is immerse myself and write with abandon to make sense of the situation, and literally try to scrawl myself to sleep, the errata notebook a line to grasp onto for the sake of saving my neck and to be pulled back to my previous reality. (pp. 22–3)

By itself, this philosophizing might become tiresome; attached to a swiftly moving narrative, it works well. Halfway through the book, a chapter is mostly devoted to a consideration of the place of dialogue in fiction, with the narrator supporting the position that dialogue in fiction functions to the detriment of fiction itself, which becomes an argument for telling rather than showing. This sort of explaining shouldn’t work; usually when I come across this sort of thing, I react badly. Zell makes it work.

This isn’t a perfect book; we’ve seen the female characters before, though it’s entirely possible that’s intentional. But the greatest defect of this book is a strange one: it’s not long enough. It’s not that the form isn’t correct for the size; 116 pages wraps the book up perfectly. But like the stories of Kleist, one wishes for more. A book so enjoyable to read shouldn’t be so short, though it does lend itself to re-reading. I’m curious to see what Zell does next.