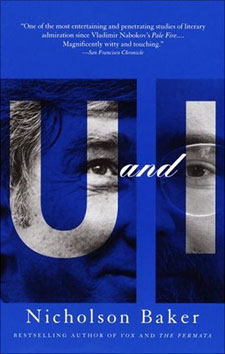 Somehow I’ve never read any books by Nicholson Baker, on account of, I think, coming across dismissive reviews of his work when I was in college; and I’ve read very little John Updike since bouncing around some of his shorter things in high school. My not reading Updike is a conscious choice, though an old one, from when I saw deciding which fiction to read in a more confrontational light. Updike, Roth, and Bellow were firmly the establishment at that point, the pricks to be kicked against. My resistance to Bellow has softened over time; I could see liking bits of Roth, though I suspect it will be a while before I get around to reading him; but Updike still seems decidedly uninteresting when considered against the other options. There’s a class association with him in my mind, fair or not: he was writing about other people for other people. Updike is someone I always identified with Harvard: he was, I think, the first novelist I ever recognized by sight in the wild, being marched into the Barker Center to be given some award. Gaddis went to Harvard too, of course, but he had the decency to get kicked out. Updike was the well-behaved novelist.

Baker, on the other hand, has become more interesting over time; I’ve liked the shorter pieces by him that I’ve come across, and I suspect I’d like some of his novels. () This book had the premise that I liked most; it’s not, however, as easily come across in used book stores, being consigned to the hell of belles lettres or essays. Obviously, Amazon obviates this problem; but Baker never seemed necessary enough, especially when there are stacks and stacks of unread books around here. Finding it by accident on a stroll from the Met to Bryant Park seemed right: and here I am, having finished his little book about Updike. I’m glad, perhaps, that I waited for this one: there are a huge number of books mentioned in this book, and I’ve read most of them, which helps, a bit, in understanding what Baker’s getting at. Here is is talking about reading, or not reading, Harold Bloom:

I know about “misprision” only from book reviews – book reviews, not books, being the principal engines of change in the history of thought, and contributing in that necessary role a certain class of distortions to the forward flow by allowing those works which contains plots and arguments that are easily summarized in their reviews to assume a level of cultural bulk and threat that the books themselves may or may not deserve. (p. 64)

This is a book about books and their authors; it is not, directly, a book about reading, partially pointedly so. Baker gives himself the constraint of not re-reading Updike while writing about Updike; so the Updike that appears on the pages of this book is the Updike who appeared in Baker’s mind, not the Updike who appears on the pages of his books. Updike stands for influence; behind him stand others, not least Nabokov. In the opening of the book, Baker draws a distinction between the way we think about dead authors and those who are alive: we can compare ourselves to living authors (as Updike was when Baker wrote), while the dead are preserved in amber (Nabokov then and now):

Readers of the living are always, whether they know it or not, to some degree seing the work through the living writer’s own eyes; feeling for him when he flubs, folding into their reactions to his early work constant subauditional speculations as to whether the writer himself would at this moment wince or nod with approval at some passage in it. But the dead can’t suffer embarrassment by some admission or mistake they have made. We sense this imperviousness and adjust our sympathies accordingly. (p. 10)

A comparison might be drawn to Out of Sheer Rage (1997), in which Geoff Dyer attempts to come to terms with D. H. Lawrence; though maybe Dyer’s difficult-to-find first book,Ways of Telling, about John Berger, might be the most apt comparison. (Does U & I come up in Out of Sheer Rage? It might, but I gave my copy of that book away so I can’t check.) I find Dyer’s account a bit more appealing: that book, ostensibly about Lawrence, is rather a book about not writing and coming to terms with the creative act. This one is about coming to terms with influence: in some ways, a trickier thing.

A case could be made for this book as a work of fiction, starting with the subtitle, “A True Story.” Baker comes off not unlike one of Thomas Bernhard’s demented, ranting narrators, though that writer isn’t mentioned in the text. The book starts with the death of Donald Barthelme, one of Baker’s teachers; Barthelme’s presence hovers over the text, as does the idea, more associated with Barthelme than Updike, of metafiction. A distinct strand of the book follows Baker as he tries to get his book published, talking to his editors at The Atlantic and imagining what his book might look like; he is explicitly concerned, of course, about the progress of his own writing.

You could say that this book hasn’t aged well: I could see how in 1991 this would have been strange and interesting, but a decade of memoirs and writing about writing on the Internet have made this seem overfamiliar. Now we know too much about too many writers. In an odd way, this is a book that would be impossible to write now: because of the Internet, there’s no longer the separation between the author and the reader that was enforced by the time when serious writing was done on typewriters and writers communicated largely through the mail or in person. Writing an email to someone who’s influenced you isn’t qualitatively a different thing than composing a letter; however, it’s much easier, and it only takes a moment’s lack of inhibitions. And in an age of rampant self-Googling, it’s almost become expected that if you write about someone, they’ll end up reading about it. Perhaps it’s better to say that this book is something of a time-capsule: it’s the way we thought about writers twenty years ago.

Do I feel the need to read Updike at the end of this? Not particularly, though I can understand why Baker likes him. But Updike is beside the point, really: this is a book that could have been about any forebear.

“Tom Disch, the late poet and novelist, once gave me a piece of advice: if I wanted to write a best-selling novel, I should write a novel about a poet. All literate Americans, he said, love poets, even though they don’t much care for modern poetry, or read a lot of it. I followed his advice, and though the resulting book fell well short of the best-seller list, I saw the fictional advantages of such a character. A poet in a novel is in touch with a realm of words more potent than the prose fiction in which he or she is embedded, and thus gains a numinous intensity of feeling from the start. It is not even necessary to supply your poet with great poems: he merely has to ponder the possibility of them.”

(John Crowley on Nicholson Baker in the Boston Review.)