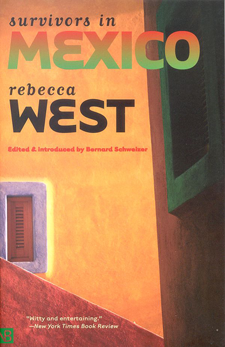 This is the first Rebecca West I’ve read; it probably does her a disservice in my mind. Survivors in Mexico is a posthumous book, pulled together from notes by the editor, Bernard Schweizer; it’s not quite fair to judge the writer by it. Obviously, I should have read Black Lamb and Grey Falcon first; I’ll get around to that eventually. But I found a used copy of this in the bookstore on Mercer Street; I’m always interested in how Mexico, and particularly Mexico City, were written about in the twentieth century. Also I hadn’t read Rebecca West.

As displayed in the book, West’s understanding of Mexico is odd, which isn’t particularly surprising when one finds out that she was fairly old by the time she got there and didn’t speak any Spanish. West never finished this book, based on her trips to Mexico in the 1960s and 1970s; the present arrangement of it is very much Schweizer’s, who seems to have acted in the interest of constructing a readable version of the book. The published Survivors in Mexico still contains the sort of repetitions and inconsistencies that one might expect from a draft. The endnotes suggest that some have been edited out and that some of West’s words have been corrected, which gives the reader some reason to distrust the text. Octavio Paz, whose Labyrinth of Solitude had appeared in English in 1961, is mentioned in the text, though his influence is unfelt; looking in the notes, one finds that “Octavio Paz” is a correction for West’s original “Mario Praz”. Her account of the assassination of Trotsky is confusing, not least because she refers to his assassin as Jacson Mornard rather than Ramón Mercader; the assassination also seems to start in Frida Kahlo’s house and end in Trotsky’s. She decides that it is impossible that Kahlo and Trotsky could have been lovers; she is, predictably, astonished to discover that Diego Rivera’s wife could paint.

Reading this book, one thinks sometimes of Alberto Moravia’s Which Tribe Do You Belong To?, a poorly-titled narrative of his travels in Africa which took place at roughly the same time West was in Mexico. Moravia’s book is surprising in that he’s almost able to see past colonialist attitudes: colonialism was coming to an end while he was traveling, and he began to come to an understanding of the horrors that the continent had undergone. West isn’t able to escape the colonialist lens: Mexico, for her, is to be viewed through a European lens. What emerges as her central thesis is especially weird and staggering: that Spanish colonialism was bloody and destructive, but it was on the whole a good thing, because if they hadn’t done it, the Ottoman Empire would have, creating a Muslim South America. As mentioned before, my understanding of West is limited because I haven’t read Black Lamb and Grey Falcon: perhaps West’s vision of the Ottomans would be useful for understanding how she could come up with this bizarre, and seemingly racist, argument. Occasionally reading this book one remembers the ignominious end of Orianna Fallaci.

This is elaborated in her account of the conquest of Mexico by Hern´n Cortés. West problematically chooses Cortés as her hero, fashioning from the nebulous historical accounts a man thoughtful and moral, though at the same time an impecunious lady’s man. It’s difficult to understand her sympathy for Cortés, who by any reasonable standard was at the least the author of a genocide. West finds moments in Cortés’s narratives that are more human: he regrets, for example, having to kill six thousand Aztecs to take the city of Cholula. This, in her telling, this was a trap set by the Aztecs that he would have liked to have avoided. The destruction of the Aztecs, in her telling, was historical inevitability:

It would have availed the Aztecs nothing to massacre Cortés and his men, for had he failed to return there were many other adventurers to persuade the Council of the Indies to sanction a larger expedition, which would certainly have been more cruel. (p. 157)

This is tangled reasoning. West’s reasoning does eventually become clear:

If Cortés had his uneasy nights, it was because he was under the strain of finding that a country he wished to annex for Spain by peaceful penetration meant to resist him, and that this country was so beautiful and strange that he did not want to make war on it and was also so horrible that, over an issue in which Spain played only a minor part, but which was vital to his own soul, he must break it and remake it. (p. 150)

The “issue” referred to in this bizarre sentence (“peaceful penetration”!) is the Aztec practice of human sacrifice and cannibalism. Cortés is a humanist because he stops the Aztecs from sacrificing the members of the other groups they ruled: all Spanish savagery can ultimately be justified because of this one moral advance. (La Malinche functions as a hero here: by serving Cortés, she freed her people.) Cortés, it should be noted, was the first to import African slaves to Mexico; this is mentioned, but blame is placed on Bartolomé de las Casas for suggesting it as a means of ameliorating Mexican suffering. Las Casas was, of course, one of the first to point out the excessive cruelty of Cortés; he comes up nowhere else, as West seems to be relying most heavily on Bernal Díaz.

It’s here that one feels unjust in reading this book. West’s narrative of the conquest of Spain comes to an abrupt end after she introduces the theme of human sacrifice in the last paragraph. There’s the sense that she wasn’t sure where she could go; perhaps she’d run into a dead end, and there’s a reason this book was left unfinished. There are easily missed opportunities: the Spanish, looking at Tenochtitlán, compare the marvelous city to the romance of Amadís de Gaula; this is used to demonstrate that the Spanish were “not insensitive, not brutish” (p. 154). Amadís de Gaula was also the inspiration of Don Quixote; there the results were far less bloody.