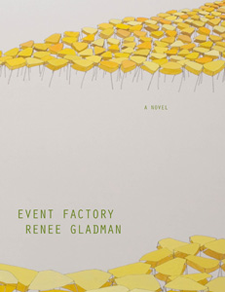 It’s hard to know what to make of Event Factory, a short novel that’s the first offering from Danielle Dutton’s Dororthy, a publishing project. The book starts off with an epigraph from Samuel Beckett’s posthumous narrative “The Calmative,” which might offer a clue where Renee Gladman is coming from. Another clue comes in the thanks at the end of the book, which end “and most especially to Samuel R. Delany, for Dhalgren.” Event Factory might be seen as somewhere between Beckett and Delany (the later Delany, of Dhalgren and the Nevèrÿon books).

While Gladman’s book might be read as science fiction, there are none of the usual signifiers of science fiction: no novelties, no space ships, everything taking place in a universe that seems to be our own. Except that it’s not: the first sentence announces “From the sky there was no sign of Ravicka.” Ravicka is, we’ll learn, a city: the reader knows of no city named Ravicka, but might suspend disbelief even for fiction that is not science fiction – has any city ever been more prosaic than Sinclair Lewis’s Zenith in the state of Winnemac? But a sentence later we find this:

The city was large, yellow, and tender.

City refers, presumably, to Ravicka – although three sentences into the book, this isn’t entirely clear to the reader: “Ravicka” could have been any geographical object that can be seen from the sky. Attaching a proper name to it that isn’t a proper name that we know signals that we are outside of our usual space: but how far outside? A city can easily be large: there’s no problem there. Yellow gives pause: this isn’t one of the colors that a city is usually described at. It’s easy to imagine a gray city. A yellow city could conceivably be some sort of tourist destination – walls painted yellow in the way that Marrakech is sometimes called a red city. But the word yellow is functioning differently than large: we’ve stepped, to some degree, into the metaphorical, because, presumably, the city is not entirely yellow, only parts of it is. Or maybe it is: an emerald city suggests fantasy. In science fiction, Delany notes somewhere, there’s a looseness of language: what’s usually seen as metaphor could conceivably be entirely descriptive inside the mode of science fiction. Tender, the third adjective, pushes us in this direction. Even if a city can be yellow, how can it be tender? This adjective, of course, points us to Gertrude Stein, whose Tender Buttons pointed out the possibilities of using words in ways they weren’t intended. (Certainly someone must have by now suggested a science fictional reading of that book?)

Science fiction is inevitably disappointing to me because you often get an opening paragraph like this: one where you can’t understand how the words fit together, which is then defused: over the course of the narrative, you learn exactly what those words mean and why they’re being used in the sense that they are. A second reading is inevitably very different from the first, because the reader has already learned how to read the book. (Perhaps this is why one finds so many trilogies in science fiction?) Event Factory does not work this way. By a second time through – I have now read this book three times, which isn’t that much of an accomplishment, as it’s not very long – this paragraph does not make any more sense. Estrangement is continual in this book. While the proper nouns at the start seem recognizable – there are characters named Simon and Mrs. Madeline Savoy and Timothy; there’s a 32 bus; Simon sings from the Gospels, which could conceivably be the Gospels we know – but soon we find characters named Zàoter Limici, Ulchi Managua, and Dar which might almost be recognizable. (Diacritical marks, as in Delany’s Nevèrÿon, function as a signifier of difference: we look at a name on the page like “Zàoter” and realize that we have no idea how it might be spoken aloud, only that its a is almost certainly not our a.) As the book progresses, recognizable proper nouns almost disappear entirely. It comes as almost physical relief when Kecia Washington reappears toward the end of the book.

What does happen in this book? The narrator, a linguist, goes to the city of Ravicka for reasons left unclear. The air of the city appears to be yellow, though it’s hard to be sure about this, and what exactly this means: perhaps its only smog, maybe its something more fantastical. People seem to be leaving or to have left the city, though why and where they’ve gone is left unclear. The narrator speaks Ravic, the language of the city; she seems to understand the gestural components of communication in Ravicka, which are many. But she still seems to be on the outside of something, mirroring the position of the reader with the book. Because there are the signifiers of science fiction, we keep expecting that something might be explained that will make everything snap into place or to explicate what the ground rules are; perhaps the narrator is expecting the same thing, but it never does. The effect is of taking a long trip in a country that you don’t understand as well as you’d hoped. Again and again there’s the sense of linguistic breakdown:

The woman interrupted, “Yes. We know all of that,” and nodded compassionately. Then continued, more upbeat, “My name is (then gave a puff of air). Will you come with me?”
And that was what I had feared: she was not Ravickian and, what was worse, she used air instead of hard sound for speech. (pp. 56–7)

There’s more than a hint of metafiction scattered through this book (on the next page, they eat what seems to be “shredded paper, which seemed to have been stewed in various dark and spicy sauces”): one wonders if “hard sound” could mean written or printed letters, since we already know that the air of Ravicka is not quite the same as the air we know. Or we might read this passage as the narrator having become estranged from language: that spoken language turns into only “a puff of air”. This is left unresolved: perhaps it’s both at once.

This book feels like Dhalgren might if that book were more linguistically turned in on itself. There’s the same sense of inscrutability: I think that’s a lot of why I like Dhalgren, and that largely works here as well. Event Factory is supposed to be the first book of a trilogy; I’ll be interested to see where Renee Gladman goes.