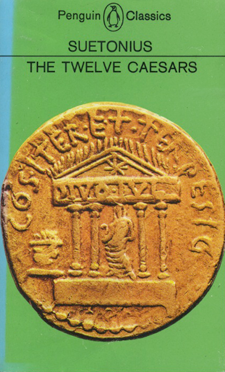 This book I have something of a history with: in a particularly uncomfortable moment during the year I worked in Rome, I was once called in as a witness to ask someone being fired over a disagreement about the contents of this book, Italian, English, and Latin editions of Suetonius being brandished as proof. Which bit of imperial misbehavior was being argued about I don’t remember anymore – spectators being boiled alive by Caligula in the Circus Maximus, maybe. I picked it up again with the idea that the life of Septimius Severus was described here; it’s not, of course, but I always feel guilty about putting off the classics, and this seemed easily digestible and full of entertaining trivia, in the manner of Petronius or Procopius. My classical history seems to be weighted in that direction; this (along with, of course, my lack of Greek and Latin) is why I’m not a classicist.

Suetonius is pleasant, not least because of what he takes to be his work in writing this book. Most of the long chapters – Galba, Otho, and Vitellius weren’t in power long enough to make much of an impression – are effectively divided in half: the first half presents the notable deeds of the emperor before and after coming to power, while in the second half, Suetonius explains what the emperor was really like. While Suetonius has a grudging respect for at least Julius Caesar and Augustus, and he seems to outright like the short-lived Titus, none of the emperors is exempt from criticism. The lives of the first two emperors are told with quotations from original documents; those don’t generally appear in the later histories, ostensibly because Suetonius was kicked out of the archives. One wonders who this book was intended for; it seems hard to imagine such a scabrous book functioning as a widely-read history. The accuracy is hard to gage; at the very least, there’s a huge amount of second- and third-hand information; at least some is outright imagined. One ends up with something like Voragine’s Golden Legend, mostly nonsensical as history, but entertaining nonetheless.

It’s hard not to enjoy the details, like the inadvertantly Joycean bit where Caligula calls his “great-grandmother Livia a ‘Ulysses in petticoats'” (p. 164). Most of the Caesars planned on staking out a month in the calendar; Claudius decided that he would improve the alphabet:

Claudius also added three new letters of his own invention to the Latin alphabet maintaining that they were most necessary. He had written a book on the subject before his accession, and afterwards met with no obstacle in getting the letters officially adopted. They may still be found in a number of books, in the Official Gazette, and in inscriptions on public buildings. (p. 210)

Claudius’s letters didn’t take; but they have, in fact, been added to Unicode: they are Ⅎ, Ↄ, and Ⱶ, and whoever added them to Unicode seems to have ahistorically created minuscule versions of them as well. Wikipedia’s story that Claudius was led to add new letters because of his mother’s taunting isn’t in Suetonius; however, Antonia does refer to her son as “a monster: a man whom Nature had not finished but had merely begun.” The young Claudius comes off as rather endearing, almost a young Prince Hal: his “reputation for stupidity was further enhanced by stories of his drunkenness and love of gambling.” He has questionable friends:

Some jokes exercised their wit by putting slippers on his hands as he lay snoring, and then gave him a sudden blow of a whip or cane to wake him, so that he rubbed his face with them. (p. 190)

What’s strange about this book as a whole might be how modern so much of it seems – the struggles for power and succession aren’t immensely different from anything that might be happening today – and yet how unthinkable so much of what’s described as daily life – even aside from the exaggerated excesses – seems to be. A paragraph from early in the story of Vespasian might illustrate this:

In Greece, Vespasian dreamed that he and his family would begin to prosper from the moment when Nero lost a tooth; and on the following day, while he was in the imperial quarters, a dentist entered and showed him one of Nero’s teeth which he had just extracted. (p. 282)

This is not a particularly odd moment in the narrative; indeed, this comes in the midst of a long sequence of auspicious signs that Vespasian noticed prior to becoming emperor. Sequences like this occur again and again in this book. How can we make sense of this? The rationalist approach would say that dreams don’t foretell the future, and that this is an ex post facto dramatization of what happened: Vespasian wanted to be emperor, Vespasian was handed a tooth, Vespasian explains that he dreamt he would be emperor when Nero lost a tooth. Presumably Vespasian is in Greece with Nero, though this is unclear to me. In a more horrific version in the previous paragraph, a stray dog brings a human hand to Vespasian while he’s eating breakfast; this is also a good sign because a hand is an emblem of power. Suetonius doesn’t seems to doubt these signs: he reports them as fact. Vespasian did become emperor, after all. But one feels unimaginably far from a world in which a dog bringing in a hand is regarded as a good thing.

The amount of casual violence is also staggering. Even apart from imperial excess, there’s the sense of life being astonishingly cheap. Regiments of the army are repeatedly decimated; minor crimes are given capital punishment; countless numbers of gladiators and prisoners die in arenas. The family trees of the Claudians and Flavians contain more unnatural deaths than not. Roman life expectancy wasn’t pretty, of course. But it’s almost impossible to imagine what it would have been like to live in a world where death was so inescapable; maybe arbitrary whims of gods make more sense.

“Why the surname ‘Galba’ was first assumed by a Sulpicius, and where it originated, must remain moot points. One suggestion is that after a tediously protracted siege of some Spanish town the Sulpicius in question set fire to it, using toches smeared with resin (galbanum). Another is that he resred to galbeum, a kind of poultice, during a long illness. Others are that he was very fat, the Gallic word for which is galba; or that, on the contrary, he was very slender – like the galba, a creature which breeds in oak trees.”

“Tiberius also paid Asellius Sabinus 2,000 gold pieces, to show his appreciation of a dialogue in which a mushroom, a fig-picker, an oyster, and a thrush took part in a competition; and established a new office, Comptroller of Pleasures, first held by a knight named Titus Caesonius Priscus.”