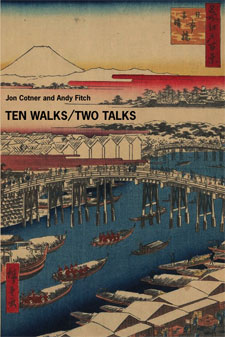 This is a book that I read entirely on public transportation: on the way to a party on Saturday night and making my way back home from a brunch in Brooklyn on Sunday afternoon. This feels wrong, to a certain extent: this is a book, as the title suggests, that’s about walking and talking. It’s difficult to square these pursuits with reading, which for the most part is a solitary activity and one that can’t be done while walking: to read is necessarily to abnegate the outside world. It’s not entirely impossible to combine reading and walking – I remember reading The Recognitions for the first time while on the mile-long walk between work and home one summer – but that was a walk that I’d taken many times over already, and I’m not sure how much I got out of that reading of the book. It was college: maybe it was more performative than not.

This is a small book, consisting of four sections, divided by seasons, each section introduced by a recaptioned reproduction of prints from Hiroshige’s One Hundred Famous Views of Edo. The first and third contain narratives of five walks from what might be five consecutive days in New York City; told in the first person, the narrators seem to alternate. The second and fourth sections contain transcriptions of two conversations between “J” and “A”, whom we might assume to be the authors: reading these sections, the reader can work out who is responsible for which sections of the walks. Upon scrutiny, the book’s structure becomes less clear: the walks sections are headed “Early Spring” and “Late Spring,” while the talks are “Early Winter” and “Late Winter”. The second talk refers back to the first talk, but the temporal location of the walks is unclear: we might reasonably presume that winter comes before spring, and that the talks are a result of the walks, but there’s no concrete evidence for that. Internal evidence in the walks sections suggest that they happen in March and April of 2005.

It’s in the talks that the project of the book becomes clear: these sections of the book presents a transcription of two conversations, with all the strangeness that appears when oral language becomes written language (as in, for example, Ed Friedman’s The Telephone Book, transcriptions of his telephone conversations). Conversation is a very different thing from a printed interview. Here, for example, is an extract from the first walk, headed “Central Park, 9:10 p.m.”:

J: Sure I’d wanted to cross the park today, but spent hours printing a writing sample for UCSD: a total, maddening loss of time. In fact one guy caught me losing my cool. I explained only printer troubles . . .
A: Let’s move down the mic a bit.
J: make me lose my cool.
A: I got I got caught bowing to the Huddlestone Arch waterfall by this shadowy figure who . . .
J: A scary . . . (p. 23)

Here the mechanics become apparent with the reference to the microphone that’s recording this conversation. The speakers’ voices overlap; punctuation is something that exists in written language, not spoken language. It’s possible there’s a certain amount of self-consciousness that comes with speaking when one knows one is being recorded: subjects bounce back and forth very quickly. (In the second talk, the recorder is switched off at a point when the speakers become aware of those surrounding them; then it is resumed, with the explanation that they’ve moved.) The reader can make sense of most of it with some effort.

Once it becomes apparent how the talks section works, the reader immediately starts wondering about the walks. A representative paragraph, from the last walk; the speaker is near Riverside Park:

A townhouse I otherwise appreciated held patriotic ribbons wrapped around the porch. A dog crossed with its owner calling Stephen, wait! Two Scottish terriers looked less intelligent side-by-side. An old Japanese woman wore a bowler hat. The question Was she attractive? made no sense I was attractive. She needed my gaze and I delivered it. (p. 57)

The speaker here is recording everything he does on his walk; however, this is written language, something not composed in the moment. One can’t very well walk and write at the same time; it’s possible he’s scribbling notes to himself, or using a voice recorder, but his person does seem to be in the moment. One wonders, in passing, if these walks, ostensibly taken alone, were actually taken together, with one of the authors walking and one recording; but that also doesn’t seem like it would pass without notice.

A passage late in the second talk explains the concerns at stake:

A: Yeah as soon as something gets put on paper [Cough] chance I’ll retain it. Or perhaps you know: when the Laotians began to write, which happened, I believe mid-seventies (a French priest designed a print language for them), they lost half . . .
J: Socrates talks about this in the Phaedrus. He refuses to write since it would weaken his memory.
A: Hmmm I’ve heard an implicit anxiety throughout Plato’s work is that, for the first time ap appears the potential for discource to be preserved – to pick up new interpretations the author couldn’t anticipate, interpretation justified by textual proof. And this anxiety leads to conceptions, you know Platonic conceptions of forms (an idealized world; a world more permanent than the written one coming . . .
J: So you think Plato’s disdain for the empirical world derives . . .
A: His . . .
J: [Muffled] books ambiguous?
A: Ambiguous in a way things hadn’t been. A new temporality develops through them, as Plato’s thought becomes our thought. (pp. 82–83.)

The book is an attempt to get back from language what’s lost when put on paper – with the recognition that it has to be a book. What Plato says on the pages of the Phaedrus doesn’t, in the end, matter quite so much as how we internalize it. The discussion then moves to the burning of the Library of Alexandria, and how we presumably lost many of the works of the pre-Socratics there; I was left wondering if the book might not be paradoxically more fragile than the remembered text, though on looking back, that’s not in this book.

In the first talk, we find the reason for the Hiroshige illustrations, in a discussion of how the light brings to mind one of the One Hundred Famous Views of Edo:

. . . . As always in winter months I’ve I value Asian, specifically Japanese art, for training us to recognize the splendor of bare branches.
J: That’s why I go back to Asian poetry and painting, to to track the beauty of each season but not catch myself . . . and escape the trap of longing for summer in the heart of winter. (p. 28)

One senses that this is what this book is attempting to do.