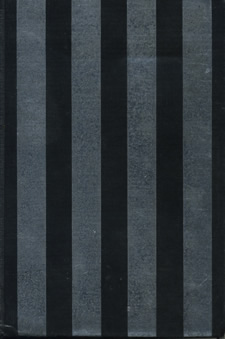 Love Days, originally published under the pen name Henrie Waste (from HENRIEtta WAlter STEttheimer), has the strange full title “Love Days [Susanna Moore’s],” Susanna Moore being the protagonist; perhaps another Love Days had been recently published in 1923 and this was to avoid confusion. The Stettheimer sisters were friends of Marcel Duchamp in New York; this novel features a character based on Duchamp, which is my reason for picking up the book; his correspondence with Ettie Stettheimer suggests that he found the portrayal amusing. His correspondence with the Stettheimer sisters, and particularly Ettie, was one of his most sustained; I’ve seen her sister Florine’s paintings, some of which feature him, and Carrie’s immense dollhouse, now at the Museum of the City of New York featured a tiny version of Nude Descending a Staircase that he made to order. Ettie Stettheimer’s writing, however, seems to be neglected.

The book is presented from the perspective of Susanna Moore, a New York orphan who seems to be of considerable means, though that’s never quite explained. The book isn’t a roman-à-clef, though Duchamp appears rather transparently as the figure of Pierre Delaire; nor is he the only famous figure to appear in the book, as Maxim Gorky has a role as an extra in Capri, and a Cubist painter couple might be meant to be the Delaunays. The book follows Susanna Moore, first through Barnard, then studying in Germany; thus far, it might be said to follow the life of Ettie Stettheimer, who earned a doctorate in philosophy at Freiburg in 1907. She then returns to New York, where she sets herself up as an independent scholar of Greek; after soundly rejecting men for most of the book, she very suddenly falls madly in love with Grodz, a French painter of Finnish-Greek extraction, and marries him. Ettie Stettheimer, like her sisters, never married.

As far as I can tell, this volume is the most recent publication of Ettie Stettheimer; there doesn’t seem to be much interest in her prose. This particular volume is a bit macabre: evidently after her sisters Carrie and Florine died and Ettie had put their affairs in order, she decided to provide for her own posterity by putting together this omnibus edition of her own work: this novel, an earlier novella (Philosophy: A Fragment, about an American girl studying philosophy in Germany), a philosophical work that had been her dissertation on the work of William James (which seems to have been her most widely read work), and four short stories. She adds an introduction to the whole; a few contemporary reviews are inserted as introductions to the individual volumes. The Memorial Volume was published by Knopf in 1951; nonetheless, this has the slightly sad feeling of a vanity project, right down to the dedication, to “E. S.”.

This isn’t the most likable novel; at 350 pages, it’s probably twice as long as it needs to be, and fifty-page chapters are tiresome. The characters are predictable: the overly romantic French artist that she marries almost immediately is filled with jealousy before the honeymoon is over. Stylistically, there’s a rather excessive use of ellipses, designed to indicate emotion; there’s sometimes something about the writing that seems off.

Susanna folded the letter and gurgled. She gurgled when she laughed to herself and felt apologetic for finding herself amusing. (p. 62)

This gurgling is a one-time affair, but she is given to drawling, even in German. Later, when the heroine considers Ewart, an American she meets in Capri when he offers her a powder for a headache of convenience:

She decided that he looked like a smart twenty year old lounge lizard, and like a forty year old scientist, and she was pleasantly intrigued by the unresolved combination he presented. (p. 187)

This description is good enough for a reprise thirty pages later:

Ewart, the considerate and objective young lizard bulging with a brow that seemed a temple of wisdom, was saying, “Of course it has been proved statistically that the great majority of marriages are unsuccessful; one member is unfaithful to the other, which is probably perfectly natural, since according to psychological law people grow tired of anything after a time, etc. etc. . . .” (p. 216)

Susanna Moore’s marriage does collapse and end in divorce, though the actual collapse happens in a gap between chapters; it is blamed on pneumonia. While recovering from the pneumonia in a sanatorium, she first encourages the attentions of a Nietzscheian baron; then she finally finds love in the person of a English doctor who is the baron’s wife’s cousin and reputed lover but who has tuberculosis. This isn’t quite as interesting as it might sound: plot twists are telegraphed well in advance and the characterizations and varied geographic settings (hotels in Europe, mainly) aren’t particularly interesting.

Susanna Moore seems, on the whole, rather full of herself and a bit tiresome. On the whole, she appears lacking in feminist consciousness; but there are strange passages that suggest that she might be more interesting. While she’s in her Greek class at Columbia, one of her friends, whom she dislikes, suggests that she should get married and settle down with children, a suggestion that Susanna has no truck with:

”No,” Susanna said in her languid way that never sounded final, but often was.— Whenever her potential motherhood, marriage or death were touched on in conversation she felt as though some one else were being referred to, and the chief emotion produced in her was one of estrangement from the speaker who so unpleasantly identified her with that other person. . . . “Let’s go on with Medea. She got married and didn’t settle down to a hum-drum existence,” she remarked, feeling much closer to Medea at this moment than to Blanche. (p. 17)

Frustratingly, this isn’t elaborated on; this is also the case later in Germany, where she complains to a would-be swain that she thinks is odd that an elderly German man should be explaining Sappho to her; then she asks Tom to explain what he thinks of Sappho, which isn’t much more helpful:

”In other words, because she made great poetry of perverse love, she must have been perverse?” she asked.
“Felt perverse, anyway.”
“And,” Susanna continued to educate herself, “why was she perverse; because she had no adequate normal love affair, did you say?”
Tom burst out laughing. “You seem to regard me as an authority, you funny Susan, or are you trying to find out something else? I wasn’t there, you know; I mentioned this as a probably cause of perversity: often men and women are driven to perverse practices because the normal satisfactions obtainable are of an unbeautiful nature, more unbeautiful than the perverse ones seem to them at any rate to be. This is the most favourable interpretation of perversity, reserved for artists and people who seem to have some pretensions to a sense of – of fastidiousness.” Tom paused; he had seen Susanna’s face frowning like a perplexed child’s trying to understand. His strident voice grew softer. “All in all, my dear, it’s not an attractive subject, and it’s hard for healthy people to grasp, so don’t be alarmed if you don’t ‘get’ it; neither does the Professor. Susan, child, where are we going?” (p. 70)

With that, the subject is dropped entirely. It’s vexing, because there is obviously an interesting subject here; but again it’s simply pushed aside. While in Germany, she is pursued by countless lovelorn Germans, a romantic people; she wants none of their attentions, and realizes that she can escape them by saying Mir ist schlecht, I feel sick. There’s an echo of this at the end of the book: Hugh, her English doctor, is the perfect object for her love because he is sick, and loving him will make her sick. He refuses; she seemingly kills herself by covering her mouth and holding her breath. It’s a bit too clumsy to be affecting, and Susanna Moore isn’t quite a model feminist: but the novel does provide a picture of a woman trying to make her way through an uncomprehending and unjust world.

The character based on Duchamp has a walk-on part; he visits her once, and stays for five pages. Susanna Moore appears to have no real friends; a few appear, but each is jettisoned in their turn. Pierre Delaire seems to be the only one to escape this. He isn’t a romantic figure to her: she thinks that “his delicate fairish classicality of a dry and cerebral quality had all of beauty except beauty’s particular thrill” (p. 95) and he disappoints her by having shaved his head. He explains his new canvases:

”In form Cubist – but there is an ulterior intention which removes them from Cubism. I wanted to produce those impressions so painful to the eye which it sometimes receives from a moving picture when several objects more simultaneously at different velocities, – for instance in the picture of a race. Do you remember that we once saw one together and remarked on it? The eye became confused and the head a little dizzy. Eh bien, it interested me to get these same effects through static means.” (p. 96)

Susanna Moore refused to take voyages with Delaire, just as Ettie Stettheimer refused to set sail for Buenos Aires with Duchamp; Moore and Delaire fall into a discussion of their lives as a solar system, a mythologization which might, at a stretch, be seen to reflect Duchamp’s myth-making in the notes for The Large Glass. And then he wanders out of the book: he doesn’t seem to have missed much.