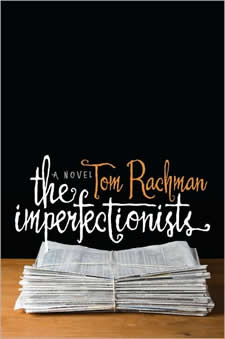 My friend C. sent me this book as a gift; several years ago, we wrote a travel guide to Rome together, and she had thought this book, written about a former AP staffer in Rome about a newspaper in Rome, might be interesting. She didn’t love it; I’d noticed the reviews and thought the book might have potential, even though the wrong sort of people were liking it, but after flipping through it in a bookstore I was confident that it wasn’t a book I needed to buy in hardcover. It’s nice to be sent a book as a gift, especially a book that someone has already read and marked up with their displeasure; there’s something nice about reading a book that you know you’re bound to dislike, figuring out exactly why you don’t like it.

What might be most interesting about this book is its structure: it’s constructed from 11 short stories, each given the title of a news story (a strategy that ends up coming off as a gimmick) and a subtitle with the name and position of a person who works at an English-language newspaper based in Rome which will close by the end of the book. Each story is relatively self-contained; there’s chronological progression through the stories, though they seem to happen from around November 2006 to around April 2007, dates which can be pegged by the news stories. Each story is told from the third-person perspective of a different character; characters recur, and complete stories can only be constructed by reading more that one story. This straitjacket approach to structure doesn’t always work; some characters are more extraneous than others (a judicious editor would have cut at least two and possibly three chapters) and a couple of major characters don’t get their own chapters. The success of such polyphony is decidedly mixed: the voices of the women, in particular, seem cartoonish – women in positions of power, for example, turn out to be vicious harpies with unsatisfactory sex lives – and the character that Rachman seems to be having the most fun writing, a veteran scoundrel reporter named Rich Snyder, is the most tangential to the greater narrative.

Each chapter concludes with a separate section, set off in italics; these report the history of the newspaper, starting with the newspaper’s founding in 1953 and moving into the present to converge with the main narrative at the end of the book. The newspaper itself would be the main spine of the book; this isn’t, however, as compelling as the people around it. At the end of the book, one of the characters has the intention of writing a history of the newspaper; but this history, we are told, is never started, and the italicized history is from an omniscient third-person perspective that is not his.

The book’s structure suffers from being similar to Georges Perec’s Life A User’s Manual, which also tells interlocking stories from multiple perspectives; Perec’s book constrains itself to a specific moment in time rather than a series of instants, as this book uses. Finishing Perec’s book, one feels compelled to go back to the beginning, to re-read the narratives, knowing how they will turn out; here, one notices clues, but the overall narratives aren’t enough to compel re-reading: one doesn’t feel that any more secrets are likely to reveal themselves.

My disappointment with the book os partially personal: having lived in Rome, though not during those particular years, I expect a certain amount of local color, something that should be possible. Unfortunately, this book seems to be set in Rome almost at random: there are details here and there, but the story could be uprooted and moved to Paris or Brussels without much trouble: cartographic details would need to be changed, but the overall structure (and almost all of the characters) of the book could remain exactly the same. Most are Americans in Rome; they don’t behave so much like ex-pats in Italy (a type that could be carefully delineated) so much as they behave like American characters, uprooted from America by authorial whim. A sulking character, for example, shuts herself up in her room and starts shoveling down Häagen-Dasz. It’s possible that American brand is now available in Italy; but almost certainly Americans in Rome are still likely to go on and on about how superior Italian gelato is than any American version. A surprising number of Romans love ice cream cones from McDonald’s; ex-pats go on and on about cultural imperialism. Italy seems to have little effect on these characters; some have the requisite Italian boyfriends and girlfriends, but nothing is learned from them. This is, of course, a purely personal complaint: the author has no duty to gratify me by making this book about what I want it to be about, even if that is more interesting and would make it a better book all around. There are a number of solecisms in the book, some of which might be attributed to a lack of a copyeditor familiar with what Rachman is talking about: “Fiumicino Airport” is not, for example, a proper noun but rather the town where Leonardo da Vinci International is located. But again, these mistakes aren’t likely to annoy most readers.

The biggest problem with the book, and one that might be related to its carelessness with setting, is how it strains credibility. I don’t have a problem with the rejection of conventional realism, of course; but this is a book which is using realism as its mode. (One exception, which triggered my earlier comparison to Life a User’s Manual: one character is a reader of the paper who has been making it her business to read everything in the paper, every day, with the consequent result that her chronology slips further and further from that of the outside world; finally, when she is missing a single issue, it breaks down entirely. But this is the only prominent instance of fabulism in the book.) When a book proceeds by realism, the reader losing faith in the book suggests a problem with the book. The premise of the book is that a billionaire sets out to run a world-class English newspaper out of Rome: this is problematic. Rome isn’t a place that anyone with a modicum of sense would think to do this; even limiting choices to Italy, it would make much more sense to work out of Milan, and if one were trying to get things done it would make much more sense to leave Italy entirely. Starting a major newspaper in Rome, romantic as it may sound, is somewhat akin to the idea of starting a major American newspaper somewhere like Albany. The reader wonders as well when it turns out that the newspaper doesn’t have a website. This might be believable if the book were set in 2000 or if the newspaper had some sort of specialist slant resistant to the Internet; when the paper seems to be modeled on the International Herald-Tribune and the book is set in 2006, when American newspapers were already on the point of collapse, it defies all belief, especially when this turns out to be a large part of the reason the paper collapses. That’s just not how businesses are run. One might suspend belief if there seemed to be some good reason for it, the setting, perhaps; but it’s not there.