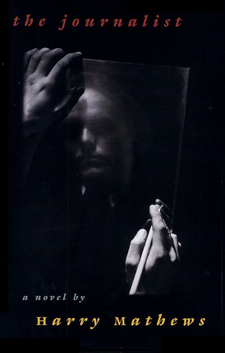 One initial reason that Harry Mathews’s The Journalist is interesting is the simple problem that he takes as his subject: that of narration in the novel. The narrator who records what’s happening is a convention of the novel, going back to the letters that compose Samuel Richardson’s books, letters that are so thorough, it has been noted, would take more time to write than actually passes in the narrative itself. The reader might recognize this; but there’s a suspension of disbelief. We understand how a novel is told. The novel as ostensible diary has a similarly long history: as with reading letters, there’s the frisson that comes from reading someone else’s diary. Most first-person narratives, of course, aren’t actually in the form of the diary itself, but there’s something of an implied diary: we assume that the narrator is writing down what happened, and we’re content to call this entirely artificial form “realism”. There’s the problem, of course, that writing is not commensurate with life: it takes more time to have something happen and write it down than it does for something to happen, to say nothing of turning its description into something that anyone else would want to read. And plot, of course, only appears after the fact.

The narrator of The Journalist seeks to keep a journal of everything that happens to him; the book is that record. It’s not coincidental that it’s also a record of insanity: as the narrator seeks to keep track of more and more things, more and more of his life slips away. It’s impossible to live and to actively record your life at the same time, life recorders to the contrary: the sticking point might be the active consideration of the recording of one’s life:

How can I expect to include all I want from a day or part of a day I’ve just lived through if I meekly follow the line that leads from a beginning to an end? That line can only oversimplify. It sticks to the obvious and reasonable, avoiding all that lies outside its “inevitable” progress, avoiding what I most hope to record, the then and then that might not have led here at all and that, even if they did, had anyway their own momentary savor and deserve better than to be flattened into stepping stones on the path to another night’s sleep. To follow chronology means fitting things into place, making sure that nothing has happened. How to see things out of place? Analysis will subvert the illusory naturalness of memory left to its slippered self. (pp. 19–20.)

Such consideration requires recording of its own; one thinks of fractal coastlines. Of a piece with his recording is his division of his journal-writing into ever more complex categories: starting with dividing the what is fact (“A”) from the subjective (“B”), then dividing the two categories more and more: towards the end, something might be “B I/b.2a” if it’s something that the narrator is told by his mistress Colette, for example. A quarter of the way into the book, the text column narrows: marginal notes beside the text note the category that part of the narration might fall into. Not every sentence is classified; I suspect most readers can’t help but ignore the marginal categorizations as deciphering them would retard reading.

It is, however, a convincing narrative of craziness. What seems to start as a harmless pursuit (albeit a pursuit recommended to the protagonist with the idea that it will help him) is ratcheted up more and more and his depictions and classifications become more and more detailed. It’s a harrowing book as well because of the metafictional aspect of it, which might be said to implicate the reader. The narrator loses control of his own life by writing about it; the reader can’t help but consider that a necessary condition of reading is to ignore the world in favor of the book. The Journalist isn’t necessarily a pleasant book to read, and it probably shouldn’t be, given its subject.

It’s hard to pinpoint when and where this narrative takes place: Mathews seems to be purposefully evasive. The setting seems to be a smaller city in a European country: where exactly that might be is left vague, and the list of places that it’s not seems to be larger than the list of those that it might be. Everyone eats well; they have pleasant love affairs which cause no pain. The time seems to be the late 1980s, although again there are no specific indicators; the computer exists, but is non-invasive in this world, which does bear a decided resemblance to that of the pastoral. The vagueness is intentional, as is noted when the narrator’s journal is scrutinized by another:

He also suggests that I add references to contemporary events to my account to expand its admirable specificity and make clear to my readers where and when each entry take place. I object: I know where and when they all take place, and following his advice would mean wasting scarce time. (p. 206)

This drama is interior: something like it could be happening anywhere, to anyone; it happens every time a novel is written with a journal-writing narrator. There’s a shock in the last book of Proust when the reader realizes that World War I is happening: the narrator has been writing away, to the exclusion of society, and time has been passing.

Another book of metafiction, Tom McCarthy’s Remainder approaches the same subject as The Journalist from a different direction, less concerned with character and more concerned with form; there’s a similar progression in that book, and it’s a bit surprising that I’ve never seen the two books compared. To my mind, Mathews’s book is superior because it’s more human, pointing out the unreconcilable contradiction between art and life. Mathews’s book is more concerned with text and its ineluctable linearity which forces narratives upon lives. McCarthy’s characters purposefully feel more like puppets, at service to a greater artistic program: this is purposeful, but the human cost of art is left as an exercise for the reader to figure out.

3 thoughts on “harry mathews, “the journalist””