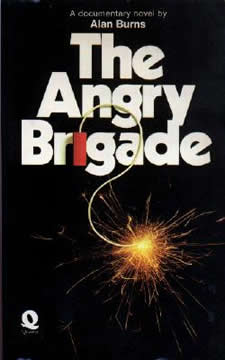 It’s hard to tell exactly what this is bereft of critical apparatus. The front cover gives this book the subtitle “A Documentary Novel”; the back cover explains that the author has used “a deft combination of serious in-depth research and imaginative reconstruction”. The seriousness of Burns’s credentials are played up: inhe is a “novelist, playwright and lawyer . . . . a barrister, [who] did research in politics at the London School of Economics, and since 1965 has been a full-time writer.” An unsourced epigraph facing page 1 declares that “The true story of the Angry Brigade will never be told until they publish their memoirs . . . if they ever do.” A short section entitled “Focus on the Angry Brigade” starts the book; signed “A.B.,” the ostensible author explains that he interviewed six people involved in the actual Angry Brigades, but on the condition of concealing their identities:

I therefore adopted the method of the ‘collective autobiography’, telling the story in the words of the participants, but without ‘naming names’. The collective nature of the book is appropriate to a movement whose members remain anonymous for ideological as well as legal reasons. . . . This book brings together the experiences of members of two activist communes. It tells how as individuals they became radicalized, how as groups they were organized, how they related to the world outside . . . . This book relates past events in the past tense, but similar groups and activities continue in various forms. The story is told naturally in different tones of voice and different accents. The reader will distinguish the various motives and attitudes of the speakers, and judge the quality of the men and women who took part in these events. (pp. 2–3)

What remains is an odd document. I certainly can’t pin any historical figures to the names of the characters; this is a long way from being a roman à clef. The personal characteristics seem to have been studiously scrambled. I don’t think the voices are quite as indistinguishable as Burns’s contemporary Zulfikar Ghose found them – Dave’s voice, for example, can always be distinguished because he swears more than anyone else – but there is something very strange about this. Perhaps this is intentional on Burns’s part, an attempt to suggest that individual identities have been subsumed to the greater movement; or perhaps this is how the speakers wished to present themselves to Burns, if the interviews took place as suggested by the introduction. But there’s something interesting about this anonymity: it seems appropriate for a narrative of anarchism, and it’s very different from what we’re used to in histories of terrorism.

The book takes a turn for the strange towards the end: one of the characters bombs the Post Office Tower (which actually happened in 1971; Wikipedia attributes this to the Provisional IRA) and a woman is killed. People have been injured by the Angry Brigade’s violence over the course of the book; but this death didn’t actually happen. The narrative is now firmly in the realm of fiction; this is enforced by the penultimate section of the book. Dave has been sent to jail; in this section, he counts off the 52 months and 25 days that he spends in jail:

There’s a similar entry for every month (all but the first and the last listing every day; the 17th of July is circled every year, his birthday); at the end, he’s released and takes the bus back to rejoin the Angry Brigade. It’s an odd list, taking up 7 pages: there’s not much that can be learned from it save that the 35th month has 29 days, and is thus a leap year, presumably either 1972 or 1976. If it’s 1972, he enters jail in 1969 and leaves in later 1973; if it’s 1976, he enters jail in 1973 and leaves in 1978. The book was originally published in 1973; historically, it would make most sense for him to enter jail in 1973, but something is clearly off. Jail passes in a blur; he is released into a militarized Britain, where the Angry Brigade’s struggle continues. Ivor has taken charge of things; the Angry Brigade seems to be leading a full-on rebellion against the British government. There’s a paragraph-long final section, narrated by Suzanne: she curtly tells how three bombs exploded in the basement of their headquarters while she and Ivor were sweeping it: in the final sentence of the book, she feels the shock wave of the bomb.

What’s going on here? The oddity of the end of the book doesn’t seem to be noticed either by Ghose’s piece on it nor by the other short review that I can find online, which treats it as a historical document. While the book may have started from interviews, as “A.B.” insists at the start of the book, there’s also an author of fiction at work here. Returning to the note at the beginning of the book:

Who then was responsible for the Post Office Tower bombing and those at Carr’s home, Bryant’s home in Birmingham, the army barracks in Albany Street, Chelsea Bridge early in September, and the Royal Tank Regiment HQ in Westminister? At least three have been claimed by the Angry Brigade. But it seems as if the bombings are the work of more than one group. In the words of the Special Branch’s ‘experts on the left’: ‘In calling it the Angry Brigade we’re chasing a myth because there is no one organization called the Angry Brigade. There is a theory that the Angry Brigade is a many-headed hydra.’ In other words the example set by the bombings of last year has been followed by independent political groups. In London alone there are thought to be three such groups. (p. 1)

A space has carefully been opened: “A.B.” (initials that Ghose notes also stand for “Angry Brigade”) is careful to not explicitly blame the Post Office Tower bombing on the Angry Brigade, an organization that he then denies exists as such. The Angry Brigade is as much an idea as it is a historical actor: as an idea, it can serve as part of fiction, a piece of fiction that ultimately becomes purely speculative.