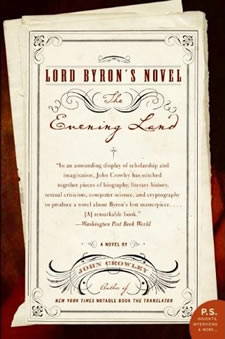 One of the virtues of John Crowley’s book is that they can often be found in awful bookstores when it doesn’t seem like anything readable can be dredged up. I started reading the Ægypt books in Idaho; here in rural Virginia, I found myself a paperback edition of Lord Byron’s Novel: The Evening Land, which I wisely hadn’t gotten around to reading yet. It’s pleasant to read his books when cut off from civilization, although they’re the sort that do cry out for the Internet for fact-checking. Did Dr. Merryweather’s Tempest Prognosticator really predict the weather by means of leaches? Wikipedia claims this is true; their entry on Ada Lovelace, though, reads like the Book of Genesis, multiple authors telling the same stories over and over again in the hopes of eventually getting it right. One wishes for a better version of Byron’s poetry than the easily accessible Project Gutenberg editions; you can’t have everything. The dictionary app on my iPhone has a definition for “operose”: that’s something.

Lord Byron’s Novel consists of three parallel narratives. The first is Lord Byron’s novel, given the title The Evening Land, ostensibly saved from destruction at the hands of his wife by his daughter, Ada Lovelace, whose notes to the novel, at the end of each chapter, create a second chronology, following her reading of the book. Byron’s text takes up the majority of the book. Interlarded between chapters is a discovery narrative, composed of a trail of correspondence, mostly emails, sent to and from Alexandra Novak, an American woman in London doing research on Ada Lovelace for a website devoted to the forgotten history of women in the sciences; Ada has encoded the novel, and Novak and her partner seek to decode it. There’s not a great deal of suspense in this, as the reader has been reading Byron’s novel and knows that it’s accomplished. Rather, this third narrative seems to be working at different ends, examining what coincidence means in fiction and in life. Another plot emerges: Alexandra’s father, conveniently enough a former Byron scholar, has been estranged from his daughter: having left academia for a career in the movies, he commits a Polanski-like crime for which he must flee the country; largely on account of this, he is estranged from his daughter. Relations between fathers and children form a dominant theme: between Byron and his daughter Ada, who he never talked to; between Alexandra and her father; and between Byron’s hero Ali and his fictional daughter Una.

It’s neat, but not too neat. It’s difficult when reading a novel which consists of interplay between a text and its annotations, to avoid thinking of Pale Fire, which has almost always done the job more perfectly. Not that perfectly is necessarily the same thing as better: Nabokov’s book is constructed so tightly that it could only be fictional, and in its unrealistic world there’s no friction where the reader might be caught and held. Crowley doesn’t seem to be attempting to compete with this: his project here is different because there’s an interplay between the real biographical history of Byron and those around him and the fictionalizations that Crowley has created. When the reader is presented with a text ostensibly by Lord Byron with annotations by his daughter, Ada Lovelace, it’s clear that the exegesis in the notes actually operates in reverse. The similarities that Ada finds in Byron’s text to his own life aren’t the signs of a novelist disguising his own life by hiding it in fiction, but rather the raw materials that the reader knows that Crowley has used to construct a novel that might be Byron’s. The reader suspects that the notes might have preceded the novel: they’re the historical pieces from which fiction might be constructed.

This works in other ways as well: when a character appears named “Lord Corydon,” we know that we understand the name “Corydon” differently from the way that Ada would have, as Gide’s work wouldn’t appear until well after her death. Ada’s notes point out that Byron’s account in his novel of how the Duke of Wellington won the Battle of Salamanca is counterfactual; but we also know that the very existence of Byron’s novel (and Ada’s notes on it) is counterfactual. The author is winking at us: in less deft hands, this might be annoying, but it doesn’t happen often enough here to wear out its welcome. The text that is to be decoded appears mysteriously, in the hands of a figure who might be the author himself; late in the process, he appears again, to cast doubt on the truth of the rediscovered novel.

This isn’t experimental fiction, in the sense that Pale Fire was experimental when it appeared; rather, it takes a form (albeit one that hasn’t been used especially often) and puts it to good use. It’s a pleasant book, exactly right for vacation reading: hence my pleasure at being able to find John Crowley’s books in remote bookstores. The Evening Land might have stood alone: it’s an enjoyable pastiche of Romantic writing, a bit reminiscent of James Hogg’s Private Confessions of a Justified Sinner though without the supernatural aspects of that book. Someone must be compiling a dissertation on the appearance of the Internet in American fiction: Crowley’s grasp of the way people talk over email is surprisingly convincing and readable, and would belong in such a volume. In the earlier sections of the book, one finds oneself racing through the pseudo-Byron to reach the contemporary narrative; as the book progresses, interest reverses itself; it’s skilled writing that can maintain such interest.