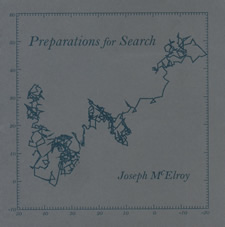 This is a short book, a chapbook really, of material that was cut from Joseph McElroy’s biggest work, Women and Men. An earlier version of this was published in the journal Formations in 1984; I can’t tell why this is coming out now. A volume of McElroy’s stories is coming out in the fall from Dalkey Archive; I don’t know if that includes this, though I suspect it doesn’t. For the past few years, he’s been reading from a short novel called Cannonball which still doesn’t seem to have found a publisher, and he seems to still be working on his non-fiction book on water, which I’ve been awaiting impatiently. But any new McElroy material, no matter how unexpected, is a source of excitement to me: this is a small book, but one that lends itself to re-reading.

The plot is easily related: a character named Enos comes to the narrator, Bethel, asking to borrow $1100 so that he can hire a detective to find his father, who left when he was two. The narrator is reticent to do this; other characters (who seem to be in their late twenties and early thirties in downtown New York in the early 1980s) are consulted, and a world is quickly fleshed out around this initial situation; it’s similar to when a pebble dropped into still water, and ripples move across an entire pond, hit the edges, and are reflected to create complex and unpredictable patterns. Here the patterns are created in the people in Enos and Bet’s worlds: their girlfriends, their relations, their friends. A world is slightly destabilized; it struggles to come back to stability. The interest in the book is in seeing how the characters react to a change – a slight one, but still a change – in their environment: it could be said that this is an ecological approach to fiction.

There’s something distinctive about the voice McElroy uses: I’ve always suspected that Don DeLillo learned a few tricks from him, though DeLillio amplifies the voice until it becomes cartoonish. It’s an internal narration, but it’s an oral narration: you can hear the narrator saying what he relates, the rhythms are those of speech rather than that of the page. In this section Bet puzzles out a relationship; Matt is Enos’s father; Elizabeth wrote Enos’s mother a letter long ago:

Elizabeth had worked with Matt in the office of a lumberyard in Salem, and she loved him though she didn’t think he was the marrying kind, as she put it. But why were Susan and I piecing together this old story as if it were not so full of gaps as hardly to be a story? What did Elizabeth look like, I guess you always want to know. The letter had been typed and was the only news Enos’s mother had ever had. Confusing, for at the time Elizabeth wrote it, Matt had just the week before quit the lumberyard in Oregon and gone down to California, to San José, where he had a job working construction. There was more to it than that. Susan recalled that this woman Elizabeth had been already once a grace widow.
As for me, I remembered what Susan didn’t know – that the lumber firm in Salem sold out soon afterward. But Susan now recalled that Matt’s girlfriend Elizabeth had been planning to leave Salem anyway. I now recalled that the former manager of the lumberyard there was named Deed, and he had been the one who according to Elizabeth’s letter had told her that Matt was in trouble as a labor agitator down in California. (p. 24)

The words are very simple; but the syntax is complicated, looping back and forth to cover a range of times. As the concern for “this old story” suggests, it’s a carefully literary voice: what’s being recounted here is something that’s past what a single oral narration could explain, a complexity that only literary writing can deal with properly. The section breaks create a rhythm only possible on the page, and the system of quotation – no quotes for recounted dialogue, quotation marks for dialogue that is happening in real time – suggests that thought has gone into creating something that works as a text. An auditor is occasionally possible; it’s hard to tell if this auditor is another character or the reader trying to understand the text.

It’s a dry voice: there are echoes of the disinterested way in which Kafka relates “In the Penal Colony,” for example, though the use to which that voice is being put is very different: McElroy is deeply interested in the social world that seemed to terrify Kafka: rather than depicting a mechanistic world, the result of positivism, he depicts a world that’s deeply complex because of the myriad interactions.

Preparations for Search seems to almost be a miniature version of The Letter Left to Me (the short novel that McElroy wrote after Women and Men: to my mind it works a bit better than that book because of its extreme compression, but Letter explores this book’s concerns about the meaning of paternity more deeply. McElroy works by digression: digression for him is a tool to achieve verisimilitude in a complex world. I think his reputation has suffered slightly because of the shallowing of the pool of readers between the 1980s and the present: his work is unremittingly serious, an attempt to use fiction to think about the problems faced by the modern world, and I think that today’s readership, driven to distraction by endless amounts of entertainment, has a harder time sitting down with his large books. This is a shame: his work hasn’t lost anything over time but its audience; maybe his output of shorter works this year will regain some of that.

It’s hard to tell very much about Small Anchor Press, the publisher, from their website; they seem to be new and based in Brooklyn, and it’s unclear to me how they came to be publishing McElroy. Preparations for Search is an attractive volume: the front cover looks good, though I don’t entirely understand the rationale for the square form, as it’s difficult to make a text block look good on a square page; consequently, the measure is a bit too wide for my taste. The presentation is a bit oblique as well: the text is composed of different sections, some only a paragraph long, and section breaks have become page breaks, giving the book an almost aphoristic look. This becomes confusing with longer sections that span pages (a problem also found when setting poetry); it can be hard to know whether a paragraph break at the end of the page is a section break as well, which matters when the sections present discontinuous moments in the book’s narration. But these are quibbles: it’s nice to see any new McElroy work, and any press that’s publishing him is worth keeping an eye on.