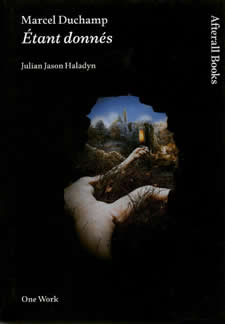 I sporadically follow Afterall’s One Work series, probably not as well as I should; most look interesting, but only a few look immediately interesting enough to put down money for. They’re small books, and the concept is good: a close reading of a single piece of visual art presented for a general audience. This one follows on the heels of the big show at the Philadelphia Museum of Art last year focused on Étant donnés; it reminds me that the catalogue is still sitting on my shelf, waiting for a closer reading. This book is conveniently sized for subway reading; thus I’m getting to it more quickly.

What’s most immediately interesting to me about Haladyn’s reading of Étant donnés is that he bases it around a reading of Raymond Roussel. (For what it’s worth, I found my way to Duchamp through Roussel; encountered after Roussel, the way Duchamp works makes perfect sense.) Roussel’s influence on Duchamp has long been known; but there haven’t, to my knowledge, been many readings of exactly how that influence worked, perhaps because it was difficult for a long time to get a handle on Roussel’s work. Julio Cortázar, for example, was interested in the connection between the two. This is easier now for an English audience now that there are two biographies of Roussel in English as well as Exact Change’s compilation How I Wrote Certain of My Books; Foucault’s book on Roussel, odd as it is, is newly back in print as well. Haladyn refers to most of these in his text. Crucially, Haladyn connects Roussel’s posthumous publication of How I Wrote Certain of My Books to the posthumous unveiling of Étant donnés. I don’t know whether a direct connection can be made – during his life, Duchamp indicated that seeing Roussel’s theatrical works was pivotal for his early works, but it’s unclear whether Duchamp knew about what Roussel was up to after his death. Duchamp would certainly have known people who would have known about Roussel – Michel Leiris, for one, as well as the members of the Oulipo – but my sense is that the historical record is somewhat dark on the subject. Foucault’s book, for example, came out in 1963, when Duchamp was almost finished with his work; and Duchamp doesn’t seem to have said anything in print about Roussel and seemed surprised by Michel Carrouges’s earlier argument about his influences. But as he admits in that letter, there are clear affinities. Haladyn declares that there was an “extreme unlikelihood” that Duchamp saw Courbet’s L’Origine du monde before constructing his nude (a statement undercut by his footnote, where he admits the possibility that Duchamp could have seen a reproduction); but not considering the possibility that Duchamp didn’t actually know about Roussel’s procédé undermines an otherwise extremely interesting argument about the similarity of Roussel’s procedure and Duchamp’s inframince. The lack of discussion of Duchamp’s own use of homophones is also an odd omission.

Haladyn structures his book around finally visiting the Philadelphia Museum to see the work in the flesh – Haladyn is Canadian, based in Ontario – his narration of his approach to the work is odd in part because he doesn’t mention that he’s visiting the exhibit not in its normal state, when it quietly waits behind its non-descript vestibule, but in the midst of an exhibition based around the work, in which there are lines of people waiting to look through the peep holes. This isn’t how the work is normally seen; if one observes casual visitors in the Duchamp room at the PMA, most are unprepared and don’t discover Étant donnés at all. Once in a while, someone does by accident: there’s a burst of excitement, everyone goes to see what the matter is, and sometimes people are shocked. (There’s no warning label on the room yet; one wonders how often mortified parents complain to the staff.) But it’s strange that Haladyn should describe the act of waiting to look as a normal part of viewing the work: it seems integral to the experience that it should take place in a room that seems like it might have been left open by accident.

The titles of Duchamp’s best-known works (Nude Descending a Staircase, The Bride Stripped Bare by Her Bachelors, Even) promise prurience that the objects themselves comically fail to deliver; Étant donnés does the opposite and is consequently even more shocking. Haladyn stresses that this work is very much about the role of the viewer, following Duchamp’s argument in “The Creative Act”: it is the viewer’s experience of the piece, with the shock entailed in it, that gives it meaning:

If, therefore, it is in and through the eyes of the viewer that the creative act reaches its climax, it seems appropriate that Given addresses the eye in such an overdetermined manner. Too look into this installation is to be (made) aware of the fact that one is looking. . . . Significantly, the immanent moment of being caught peeping through the door of Given by another viewer’s gaze is intimately part of the process of viewing this installation whether or not the moment actually occurs. (p. 82)

Released posthumously, there is no way to ask Duchamp what his work meant. Roussel’s How I Wrote Certain of My Books offers a posthumous explanation of his work, as well as providing an instruction manual to those who would create work like it; Duchamp also release an instruction manual after his death that also allows one to recreate it. This is an extremely tempting correspondence; but there are also extreme divergences between the two creator’s posthumous performance. Roussel was baffled when his public wasn’t astonished by his genius during his life; he assumed that his explanation would make it clear to the public, in didactic fashion, how they’d be wrong. Duchamp offers no such guidance; as he’d explained earlier, there was no solution because there was no problem. Haladyn’s book, though promising, isn’t entirely convincing; but it’s an interesting start, and he could profitably expand his argument.