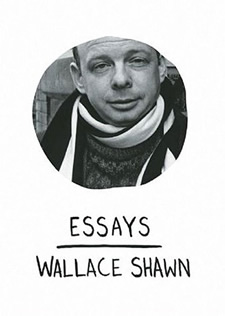 This book has been hanging around the bedroom forever; I don’t remember whether how it turned up in the house. I found myself interested in it when listening to an interview with Wallace Shawn in which he talked, rather perceptively, about Harvard class books. Class books are sent to those graduates for whom the alumni office has the address every five years; they’re very strange documents, as class members are allowed to write a statement describing themselves, presumably for members of their class that haven’t seen them for a while and might be wondering what they might be up to. (See, for example, filmmaker Irene Lusztig’s Class Notes project, where she recruits volunteers to read some of the entries from her ten-year book aloud on video.) These are very strange statements: there’s an awful lot of self-justification and soul-baring, and some brave soul could probably connect them to the Puritan tradition if Sacvan Bercovitch hasn’t already done that. Wallace Shawn, coming from privilege, is interested in the way privilege functions in America and is willing to talk about it; most people from his position avoid the subject entirely as being gauche. Shawn rightly finds the subject interesting: the majority of the members in his class seem to think that “life is good,” though the outside world is going down the tubes: a weird contrast, and one that might bear more scrutiny, in the style of Henry Adams. As someone who found myself in that realm largely by accident, as a cultural foreigner, I was interested in this book.

As it turns out, Shawn doesn’t discuss Harvard class books in the essays here, though there is a similar focus in a few of the essays. This isn’t an especially consistent collection: there are a number of short pieces written for The Nation and similar places which, while funny, feel rather slight when read in the context of a book. Coherence is also lost because these pieces cover a long span of time, from 1985 to last year; most are from the last decade, and the earlier pieces fit don’t stand out too far. About half are political; a quarter are concerned with the theater; and the rest of the space is taken up with two interviews, one with Noam Chomsky and the other with Mark Strand. But the overall effect of this hodgepodge is to create a single viewpoint’s perspective on a dark decade, a decade in which the left was dissatisfied and ineffective. Perhaps over time this will seem more interesting, as this will be a decade that historians will scrutinize; right now, looking back feels vaguely dispiriting in the same way being there did. But it’s a little book; most of the pieces don’t overstay their welcome and it’s a quick read.

It’s an interesting book because Shawn’s position is the same as most of the people I know: over-educated, interested in the arts, and deeply dissatisfied with the state of the country, and his attempt to make sense of the world is coming from a similar place to theirs. When seen in print, though, it’s strange how unfamiliar this perspective seems: maybe this is my fault, as I know that I increasingly found myself skimming things like The Nation or Harper’s because things were so bad issue after issue: what The Onion called “outrage fatigue.” But it also seems entirely possible that there haven’t been enough people complaining about what became normal in the past decade: the militarism, the flag-waving, the bizarre way in which “¿quién es más macho?” seemed to have become the deciding factor of American politics and elections. Shawn rightly wonders about this: he feels out of touch and hopeless in this world, a position that I think many of us find ourselves in. It’s important that this dissatisfaction isn’t coming from an explicit ideology: rather, as read here, Shawn presents himself as someone trying to live in a world gone mad. I don’t know how well some of these pieces would have come off in their original presentation in The Nation: at this point in time, one reads The Nation because you’re part of the American left, not because you’re part of the general reading public.

I wish that I would care more about the theater than I do: in theory, of course, it’s fantastic, but paying proper attention to it (like many other possible pursuits) requires more time and effort than I’m willing to give it based on the expectation on what I’d get out of it given my occasional casual experiences with it. That said, I like reading Shawn’s attempts to justify writing for the stage here, in no small part because it’s an attempt to justify art production of any sort in a world that doesn’t recognize that as productive work. I don’t think, of course, that there’s any need for him to justify what he does to the world; but most in his position wouldn’t bother or would take their worth for granted. Shawn notes that there isn’t a diverse playgoing culture in New York (to say nothing of the rest of the country); it’s hard to make an argument for theater as a popular art when it’s predominantly restricted to the upper class. This isn’t a new argument, of course, though one that can increasingly be applied to a wide range of artistic forms – the literary novel, for example; but it’s interesting to see this taken into account by someone who’s involved in this sort of production.

The best essays in this book (“The Quest for Superiority,” “‘Morality'”) are those that try to break us out of our cultural assumptions, as Americans and as, presumably, cultural elites. The upper classes have odd ideas, which aren’t often interrogated; and it’s to Shawn’s credit that, as the consummate insider, he can notice how strange the familiar can sometimes be. Privilege often goes unquestioned in American life. I don’t know that this is exactly the book that I would have liked it to be; but there is still something interesting here, as incoherent as it might be.