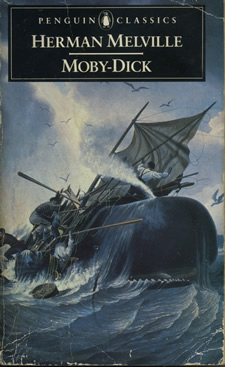 It’s been a long time since I sat down and read Moby-Dick: I vaguely recall doing that sometime after arriving in New York, and certainly I’ve picked through the book for important passages. But it’s been too long; with the end of the year coming on, it seemed a good time to go back too see what’s changed there. This Penguin Classic seems to be the version on the shelf at home; in college I had a cheap Signet that we probably got rid of when K. & I combined our books. The inside front cover bears a dedication “to ‘Poop Deck’ Bowen / a mighty sailing man / from / Corona Dan / your matey / Merry Christmas / 1987”: those two don’t seem to have written anything else in the book, though one always wonders how many copies of Moby-Dick have been read at all. The introduction and notes of this edition, done by Harold Beaver in 1972, are extensive but a bit too jocular & Joycean (back cover copy of this book compares Melville to Nabokov, ), yet seem to neglect whatever it is that I really want to find out. Obviously, it’s my own fault for not having a Northwestern-Newberry edition, which came out a year or so after this book, and which Penguin seems to have picked up for later editions of this book; this edition clocks in at just over a thousand pages, a good chunk of it notes and explanatory material, and one feels a little bad for poor forgotten Harold Beaver.

This book can be counted on for the kick of strangeness, which comes quickly: this threat buried in “Extracts” among the other quotes about whales from literary history still has a kick:

“If you make the least damn bit of noise,” replied Samuel, “I will send you to hell.”
Life of Samuel Comstock (the mutineer), by his brother, William Comstock. Another Version of the whale-ship Globe narrative.)

There’s something to still being able to be surprised by a book. It’s still there, even in the second paragraph of the first chapter, a description of Manhattan “belted round by wharves as Indian isles by coral reefs – commerce surrounds it with her surf”. The preoccupation with economics comes back on a personal level: the narrator explains that he goes to sea as a sailor rather than as a passenger because of the difference between paying and being paid:

And there is all the difference in the world between paying and being paid. The act of paying is perhaps the most uncomfortable infliction that the two orchard thieves entailed upon us. But being paid, – what will compare with it? The urbane activity with which a man receives money is really marvellous, considering that we so earnestly believe money to be the root of all earthly ills, and on no account can a monied man enter heaven. Ah! how cheerfully we consign ourselves to perdition! (“Loomings,” p. 97)

The notes to this edition don’t point out that the “two orchard thieves” are Adam and Eve, which is vexing. But this is a strange idea, of course: to link the fall in the Garden with the necessity of capitalism. Melville does this later, in “The Paradise of Bachelors” and “Bartleby,” I think – but it’s strange to see the morality of capitalism turning up so quickly in the book; it’s something that recurs, of course.

The way this book is structured is also strange: the first 25 chapters are the narrative of Ishmael, who is soon joined by Queequeg in what almost seems a buddy comedy (or, by the notes of this edition, a gay romance) where they learn the limits of tolerance. Then they board the ship, and Queequeg takes his ranks among the mates and harpooners; Ishmael seems to disappear entirely, dropped by the narrative voice as a useful device. Perhaps the changeover happens in Chapter XXIII, “The Lee Shore,” in which the character of Bulkington, previously set up to be important in the narrative, is disposed of; Ishmael also seems to disappear here. The next chapter sets out with the words “As Queequeg and I are now fairly embarked in this business of whaling”; but this “I” doesn’t really seem to be Ishmael any more; it seems to be the author, who can pull up references from other books – as the narrator does in chapter XXIV – rather than the entirely undistinguished-seeming Ishmael, unlikely to provide such exegeses. But the split is never made clear: Melville seems uninterested in such niceties. Certainly by the last paragraph in the same chapter (source of the title of the C. L. R. James book) it is not Ishmael speaking:

If, then, to meanest mariners, and renegades and castaways, I shall hereafter ascribe high qualities, though dark; weave round them tragic graces; if even the most mournful, perchance the most abased, among them all, shall at times lift himself to the exalted mounts; if I shall touch that workman’s arm with some ethereal light; if I shall spread a rainbow over his disastrous set of sun; then against all mortal critics bear me out in it, thou just Spirit of Equality, which hast spread one royal mantle of humanity over all my kind! Bear me out in it, thou great democratic God! who didst not refuse to the swart convict, Bunyan, the pale, poetic pearl; Thou who didst clothe with doubly hammered leaves of finest gold, the stumped and paupered arm of old Cervantes; Thou who didst pick up Andrew Jackson from the pebbles; who didst hurl him upon a war-horse; who didst thunder him higher than a throne! Thou who, in all Thy mighty, earthly marchings, ever cullest Thy selectest champions from the kingly commons; bear me out in it, O God! (p. 212)

Soon after this, the narrator will be reporting conversations between other people that Ishmael can’t possibly have heard; while occasionally the narrator makes reference to being a sailor on the ship, it’s hard to say anything substantive about what Ishmael does on the Pequod aside from his link with Queequeg. Ishmael is an unlikely character, seemingly too well read: it’s hard to imagine why someone who was ostensibly once a common sailor would be as well-versed in Paracelsus and Thomas Browne as the narrator is. Melville, of course, fits this description; but Ishmael as authorial surrogate is even more confusing, as Melville seems to be going out of the way to efface himself from his narrative.

I’ve spent more time with Pierre and “Bartleby,” the works Melville wrote after Moby-Dick since my last reading of this book; what strikes me about Moby-Dick is how comparatively baroque the language is. It’s almost frightening, looking back, to realize how quickly these three works were composed; but with Moby-Dick, Melville seems to be enthusiastically throwing everything at the book, following every digression and having fun doing it, something that he doesn’t do as much in the following works. The germs of both Pierre and “Bartleby” might be found here; the aforementioned self-effacement leads to “Bartleby”; Ahab’s ambition foretells Pierre’s self-destruction. Clare Spark has argued that Melville intended Ahab to be seen as a hero rather than the anti-hero we usually see him as: read with this in mind, it’s hard to tell who, if anyone, the reader is meant to identify with among the characters if not Ahab.