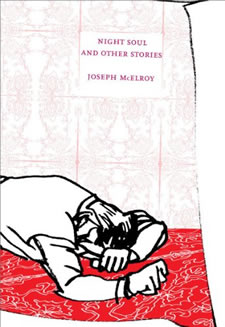 Having attended most of Joseph McElroy’s readings in New York since the release of Actress in the House, it feels a bit strange to be reading this volume of short stories, his first: I’ve heard a good number of them aloud before seeing them on the page, one twice. Some of them seem, in memory, to have been presented differently: what’s here called “Mister X” was read, I think, as part of Cannonball, a short novel; “Character” was an excerpt from Voir Dire, another novel. I don’t know what’s happened to those books; perhaps they’ll be published some time soon. The long-promised water book is evidently finished; an English version of Exponential could be assembled; and looking through the list at his site, it seems like another volume as large as this one could be assembled of uncompiled short stories. There’s a great deal of Joseph McElroy’s work that doesn’t exist in book form in English: this is frustrating, of course, but it’s also reassuring: there’s more of his work to come.

The oldest of the stories in Night Soul go back to 1981: “The Unknown Kid,” published in TriQuarterly then was originally part of Woman and Men, while “The Man with the Bagful of Boomerangs in the Bois de Boulogne,” which feels almost of a piece with Lookout Cartridge, appeared in the Partisan Review in 1984. But seven of the twelve pieces here were written after 2000: most of this is fairly recent work. And though the pieces are separated across time, atemporal groupings can be recognized in the repeated themes: sets of fathers and sons; characters from the city in the rural environment of New Hampshire in the past; disparate characters in New York in the present or near-present. The eponymous protagonist of “Mister X” asks questions of his acupuncturist:

Could Qi flood you? he asked. It was not really like that – a river, she said. His eyes closed, he dismantled the adjacent daybed opening the damn thing stretching the material. (Was Qi a two-way street? And why “daybed”? Why Leonardo? (pp. 73–74)

The reader of this book recognizes this confluence of rivers and Leonardo: hinted at is his plan to move a river for strategic purposes, mentioned in “No Man’s Land”:

Da Vinci those call him who think that was his name, said uncle, who confirmed that Leonardo had set out to move a river. Nomads would not do that. They would cross it. (p. 14)

Later, in “Night Soul,” a man listens to the vowel sounds (“ah,” “eh,” “uh”) his sleeping son makes (sounds also mentioned at the end of “Particle of Difference”) and tries to attach meaning to them:

So to the man it meant, what you found; while the next, the eh , as in “again,” stops what you found and holds it to what it is: accosts it, accosts what? the moon moving? a knife of reflected light cut by the ceiling beam? or a memory you can’t have all by yourself? (p. 283)

Baudelaire isn’t mentioned here, but it can be surmised that he stands behind the accosting. Each of these stories works separately; but placed together, there’s a resonance, and one wonders if all of McElroy’s work might be put together into a giant roman fleuve, “”a memory you can’t have all by yourself,” a record of consciousness greater even than Women and Men.

There are outliers, of course. “The Campaign Trail” and “The Last Disarmament But One” are more overtly fabulist than anything else in the book, science fiction of a sort, though not quite in the same realist mode as Plus. “The Campaign Trail” imagines the 2008 Democratic presidential primary much like a Matthew Barney film of the subject might: unnamed figures representing Hillary Clinton and Barack Obama ceremonially confront each other in a wild area of what once was Canada (seemingly the Burgess Shale, where some of the oldest fossils in North America can be found). It’s clearly a political allegory, but the meanings are hazy: what does it mean that they kill a wolverine-like beast eating a fawn? “The Last Disarmament But One” is similarly opaque: a neighboring country disappears completely overnight, leaving a crater. Connections are made between physics and children’s drawings; one senses America of the present in there somewhere, as well as, perhaps, the trace of Julian Gracq’s The Opposing Shore, but McElroy has made of this amalgam science fiction of a strange sort:

Not recently heard from, the once distinguished particle geologist with a crater in him turned to the harvesting of stained-glass minerals. Some How scientists became Whats overnight and claimed that the interesting work was now interdisciplinary. My own attachment to the great event, the loss of that neighbor nation, I one day saw confusingly and not clearly but chokingly, was like when I lost the mother of my child and heard her voice for months as on an interdisciplinary telephone or as only a function of my own deafness, and was glad I had spoken to her so often before she died. (p. 210)

This voice in this paragraph suggests Don DeLillo, who took a few tricks from early McElroy; but what McElroy is doing here seems a ways away from DeLillo’s recent work. Science fiction here is useful shorthand: writing in that mode allows one to use the phrase “the once distinguished particle geologist with a crater in him” with impunity. This is explained in context, as are the Hows and Whats; but three reads in I still haven’t understood with McElroy’s doing here.

Here and elsewhere in the book, McElroy shows that he’s still deeply interested in trying to understand the worldview of the scientist, perhaps in a lonely attempt to rebut C. P. Snow’s Two Cultures. (See also a piece from a few years ago, where he observes a neurosurgeon at work.) Scientists and engineers, usually men, wander through McElroy’s fiction, wondering about how to understand and approach big problems: again and again, he’s interested in how they think, and how they engage with ideas. The technician, for McElroy, might be an image of the writer.

7 thoughts on “joseph mcelroy, “night soul and other stories””