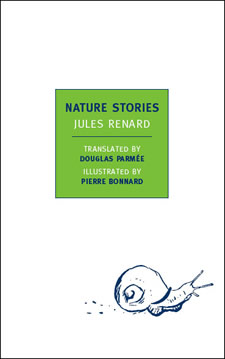 This is an edition of Jules Renard’s Histoires naturelles translated by the late Douglas Parmée and with illustrations by Pierre Bonnard. Parmée died in 2008; his introduction to the book gives the impression of having sat on the shelf for a while. NYRB presumably took advantage of the good feeling engendered by Tin House’s republication of Renard’s Journal in 2008 as an excuse for publishing this volume; another version of this book seems to be out from Oneworld Classics in the translation of Richard Stokes with illustrations by Lucinda Rogers. I haven’t seen that version, though I’d like to; Parmée’s introduction indicates that he selectively reworked Renard’s text to work better in English, and the NYRB edition is much longer than the Oneworld version. Two earlier editions of this book appeared in English in 1966: George Brazilier published a translation by Elizabeth Roget in 1966, and the Horizon Press published one by Richard Howard; both featured illustrations by Toulouse-Lautrec and seem to have largely vanished. What inspires such bursts of publication is unclear to me. But even among this year’s crop of translations, the Parmée and Stokes translations aren’t, for what it’s worth, the most interesting edition of this book; that would be a limited Italian edition with illustrations by Luigi Serafini, the existence of which has the unfortunate side effect of making this particular edition seem rather cheaper than it should.

This book consists of 84 short pieces, most describing a single animal, most around a page long. Some are as short as a few words; others almost form short stories of a couple pages. Occasionally Renard strays from the animal world to describe a forest, rain, autumn leaves, a sunset; a few pieces describe human action: looking at the wild, waiting with a gun for an animal to appear. Many of the animals are domestic; most are encountered in the wild, and one section describes animals seen in a zoo. Though the book is ostensibly about nature, he and his family recur throughout as characters: in a longer piece, about the death of a family dog, there’s a sharp description of their reaction that might be from another sort of book entirely:

Out of a sense of decency, to avoid admitting that we’re so upset by the death of a little dog, we’re thinking of all the human beings whom we’ve already lost, those we might be going to lose, all those dark, icy, mysterious things impossible to understand. (p. 27)

For most of the book, however, Renard isn’t so explicit. Nature Stories is almost contemporaneous with Jean-Henri Fabre’s Book of Insects, and though Renard isn’t by any stretch of the imagination a scientist he often ends somewhere similar. In both, the natural subjects are anthropomorphized to a degree, though they can’t usually be usefully roped into allegory: they are, fundamentally, strange, and while their ways can be observed and understood, there’s always a distance between the observed and the observer, as pointed out by his preface to his description of “a miserable sunrise”:

The sun doesn’t rise twice in the same place and in the same way. There are as many suns as there are impressions of them, which would cancel each other out. Anyway, it’s very nice to see one a year and you’re quite likely to miss it the first time. All it needs is for the sky to be closed down. The following day, are we likely to be less keen? It’s possible that on the third day, we’ve given up trying to see such a capricious sight or that the sun rises only in our imagination and the reader is still not deprived of a stylish page of fiction. (p. 76)

Like Montaigne or Joseph Joubert, Renard’s focus is as often as not on himself as observer. But in Renard’s work we might also see the genesis of Francis Ponge’s attempts to come to terms with objects. Renard’s work doesn’t generally qualify as prose poetry, though sometimes the shorter pieces suggest this: here, for example, is the entirety of “The Spider”:

though the concision here suggests nothing so much as Ezra Pound’s “In a Station of the Metro” (1913). It’s occasionally that Renard focuses as exclusively on his subjects as in these cases. The individual pieces aren’t dated in this edition; so when we come across “The Green Lizard” in the middle of the book, which reads:

it’s hard to tell how we should read the trailing comma. Is this unfinished? Is this an editorial mistake? (My edition is an uncorrected proof.) Or is it possible that Renard intended this for publication? As printed, this can be read as poetry; it’s much harder to read this as prose. Knowing Ponge, we can read this Renard as a precursor; but it’s not clear to me that this is what Renard would have intended.

Renard’s naturalism is distinctly a nineteenth-century version: he is very much a hunter, albeit one who seems to recognize the cruelty inherent in most of humanity’s interactions with the natural world. He empathizes, but to a point; there is, for Renard, a natural order in the world, and he is a part of that order. Here he is shooting partridges:

This couple of young birds has already started living together on their own. I come on them one evening at the edge of a ploughed field. They were so tightly joined, one wing on top of the other, so to speak, that the shot which killed one dislodged the other one.
The female didn’t feel anything but the male just had time to see his bride dead and to feel himself dying beside her.
The two of them have left, in the same place, a little love, a little blood, a few feathers.
So, with one shot, you’ve managed a double: go and tell your family all about it. (p. 128)

Though it isn’t necessarily clear from this quote, the birds have almost certainly been shot by the narrator himself: he sees what he has done and anthropomorphizes in the name of empathy. But it’s the last line here that might count: the narrator seems to be upbraiding himself for his hubris, for he’s only really managed to kill two birds at once by accident. The conflict is what makes this book interesting; it’s not the achievement that Renard’s Journal is, and this edition leaves something to be desired, but it’s a pleasant and entertaining book.