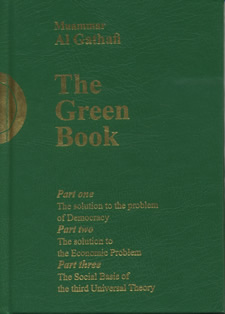 There are not a great many interesting souvenirs available in Libya, which is not, perhaps, surprising. But you can buy copies of Qaddafi’s The Green Book in many places, in many different languages, for very little money (5 Libyan dinars, around $4), which is how I came to have this. This edition is a hardback published in 2009 by the imposing-sounding “World Center for the Study and Research of the Green Book”; it’s a short book, 96 pages long, and the back explains that it’s been “republished in a new translation,” but I don’t know if this means that the text has been changed since the original. I am not, of course, any sort of expert on Libya or political systems; I was in Libya largely because I wanted to see the Roman ruins on the coast. My opinion is of course that of an amateur; but Libya is an interesting country, bearing little resemblances to most American preconceptions of it, and a good part of that is due to the idiosyncrasy of Qaddafi’s ideas.

Qaddafi came to power in 1969 in an officer’s coup; a week later, he seems to have emerged as the leader, improbably, as he was only a colonel. (The idea floats around Libya that the coup, and Qaddafi’s rise, was American-sponsored.) but by 1975, Qaddafi had codified his ideas about how the state should be run in this book, which announces his “Third Universal Theory”. The first and second theories were democracy and socialism; the third builds on these to create an elaborate systems of people’s committees which report back and forth and thus govern the country. The first third of this book announces “the solution to the problem of Democracy”; the second, “the solution to the Economic problem”; the third, “the Social Basis of the third Universal Theory”. Green marginal notes (often in the form of slogans, some incomprehensible (“No representation of the people representation is a falsehood”) appear to the left of the text; some of these also appear on billboards in the country.

Qaddafi begins with a discussion of political systems; he sees flaws in democracy, as popularly practiced, and socialism. While his criticisms often make sense (representational democracy isn’t as particularly representational as you might hope), he jumps to conclusions:

Political struggle which culminates in the victory of a candidate obtaining 51 per cent of the total votes of electorate, establishes a dictatorship in the seat of power garbed in the guide of democracy. It is in fact, a dictatorship because 49 per cent of the electorate would then be governed by an instrument of government they did not vote for, and which has been imposed upon them. This is the essence of dictatorship. (pp. 7–8)

One wonders if something has been lost in translation: he doesn’t seem to be using the word “dictatorship” as it’s usually received. There’s something that’s right here, of course; he does astutely note that what works for campaigns isn’t necessarily what’s right for government. Or his thoughts on referendums:

Referendums make a mockery of democracy. The people who respond with “yes” or “no” are not actually expressing their will, but rather are constrained to respond as such because the concept of modern democracy so dictates. They are only allowed to select one of two words: either “yes” or “no”. Referendums represent the most extreme repressive dictatorships. Individuals who respond with a “no” should be able to state their reasons for this response and why they refrained from responding with a “yes”. Similarly, individuals who respond with a “yes” should be given the opportunity to justify their consent and explain why they did not choose to give “no” as an answer. Each should be able to speak out and give the reason for agreement or disagreement. (pp. 19–20)

(This is glossed as “Referendums make a mockery of democracy” and “Individuals must have the opportunity to justify opinions”.) He’s right to point out that there are problems with referendums (cf. California’s governments); however, his response is puzzling. The problem is with democracy; he solves this by redefining democracy to mean People’s Congresses and People’s Committees. Here’s how:

This is glossed “Committees everywhere”. A rather complicated chart attempts to explain the interrelations of the various committees and congresses but leaves me entirely confused, as does how this theory actually relates to practice, if at all. Qaddafi’s word for this is the neologism jamahiriya (جماهيرية), a derivation from the the words “republic” and “masses”; maybe in English you could call it a “repeoplic.”

The second section of the book attempts to explain economic theory. To summarize by its glosses:

Qaddafi’s reasonable progressive here; he explains that it’s very important that everyone should have their own home, but everyone should only have one home, because that’s where trouble starts. One should also have a vehicle. Domestic servants lead quickly to slavery.

The third section of the book explains his social thought; here, the book becomes itself. The family and religion are at the center of Qaddafi’s world; everyone should have both. The family is extended to the tribe, which perhaps makes sense in Libya, but which makes one a bit wary. From the tribe springs the nation (“a large extended family that has passed through the tribal stage – the tribe, then a plurality of tribes, that have branched out from one common source”). Next there’s a section on women; Qaddafi is paternalistic (“Women, like men, are human beings”) and almost buffoonish (“According to gynaecologists women, unlike men, menstruate each month”), but he comes to the conclusion that although women and men are separate they should be equal. Nurseries are tyrannical; motherhood should be respected as work. Some questionable science comes into play (“The male in the plant and animal kingdoms is born naturally strong and striving, while the female in both kingdoms is naturally born beautiful and gentle”), echoed in the Lamarckianism in the section on music and art:

If a community of people wears white on a mournful occasion and another dresses in black, then each community develops particular attitudes towards these colours: one community would like white and dislike black and the other like black and dislike white. Moreover, this attitude leaves a physical effect on the cells as well as on the genes in the body. This adaptation will be transmitted by inheritance, and the heir would come to dislike the colour disliked by his parents, as a result of inheriting their feelings. Consequently people only relate to their own arts and heritage. Due to the factor of heredity, this feeling of harmony eludes them when they come into contact with the arts of others who differ in heritage and yet speak a single common language. (pp. 88–89)

This is, of course, ridiculous; the book is finished with a section on sports and horsemanship, where Qaddafi comes out against public spectacles (unbecoming in a democracy) and for private practice. There are now, however, soccer teams in Libya, as well as increasingly visible private corporations; it’s hard to tell how seriously the Green Book is taken now.

Qaddafi seems to have followed Duchamp’s lead in following up his Green Book with a White Book in 2002, but the White Book seems mostly inaccessible (save for a pile of Spanish translations I found in the gift shop of the Libyan airport). One can, however, read the White Book in the Green/White Book Room in the new hi-tech Museum of Libya in Tripoli; the White Book is smaller than the already small Green Book, and seems to contain Qaddafi’s proposed solution to the Israel/Palestine problem (one state, to be called “Israstine,” based on the model of Lebanon. See his op-ed from 2009 in the NYTimes.

Qaddafi’s hope with the Green Book seems to have been to export the jamahiriya elsewhere. This doesn’t seem to have gone very well; it seems possible that the reason he’s done as well as he has in Libya is that it’s a small country, population-wise: around 9 million people, the majority of them clustered around Tripoli; there’s also a huge amount of revenue from oil. How well this works in the future is a good question.