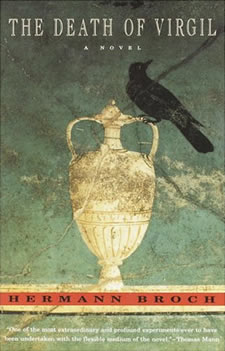 I’ve had this book on my shelf for a long time – since December 2001, I think, when I bought it with a copy of The Sleepwalkers, which I read much more promptly. I found The Sleepwalkers through Gaddis’s J R, which repeatedly references that book; I remember reading it on a trip to Chicago and being astounded by the way Broch’s novel unfolds, starting prosaically and becoming increasingly lyrical across all three sections. Somehow The Death of Virgil seemed imposing and I put it off, the same way I put off Proust at that point; I did find a copy of The Guiltless and enjoyed that as well, though not as much as The Sleepwalkers. Broch’s two volumes of non-fiction didn’t do quite as much for me, especially Geist and Zeitgeist; a couple years ago, I found an old copy of The Unknown Quality and found that I disliked it: Broch seemed disdainful of his characters in a way that didn’t seem artistically productive at all. In the meantime, I’d finally read Robert Musil, and decided that I liked Musil’s open-ended approach to The Man without Qualities better than what Broch had been doing. Last year I intended to re-read The Sleepwalkers to see if the book had changed; but I didn’t get around to that. Packing for Libya, I realized that I’d have an increasingly valuable chance to read without interruptions; so I threw my long unread copy of The Death of Virgil in my bag. But I also went into this book with the feeling that I was reading something that was good for me that I didn’t especially want to read. And another caveat: my experience with Virgil is dusty. I read a decent chunk of the Aeneid in high school, but I’ve forgotten most of whatever I knew. I did some poking around online after getting an Internet connection back, and at some point I’ll get around to re-reading the Aeneid; but for the present reading, my lack of knowledge was embarrassing.

The Sleepwalkers has a reader-friendly arc: it starts out normally and becomes more and more lyrical. The idea of progress can be read into Broch’s style. The Death of Virgil is more difficult, as it starts in the same mode that ends The Sleepwalkers. The reader can work out what’s going on easily enough, but the effect is to make the book daunting to the reader, who hasn’t been eased into it. The sentences go on and on; there are few paragraph breaks, and it serves as a stream-of-consciousness record of sensation of the titular Virgil, who is, as promised, dying. The Death of Virgil is divided into four sections; the third section, where Virgil is talking to Octavian and his friends, deviates from this formula by bringing in much more dialogue. Most of the book, however, is from the perspective of Virgil; not all of Virgil’s interlocutors actually exist.

There are passages here that are immensely beautiful. A sentence from an early section where Virgil considers hands:

Oh, unbridled became the desire to stretch out the hand toward those still so distant shores, to reach into the darkness of the shrubbery, to feel the earth-born leaf between his fingers, to hold it tightly there forevermore—, the wish quivered in his hands, quivered in his fingers with uncontrollable desire toward the leafy branches, toward the flexible leaf-stems, toward the sharp-soft leaf edges, toward the firm living leaf-flesh, yearningly he felt it when he closed his eyes, and it was almost a sensual desire, sensually simple and grasping like his masculine, raw-boned peasant’s fist, sensually savoring and sensitive like the slender-wristed nervousness of this same hand: Oh grass, oh leaf, bark-smoothness, bark-roughness, vitality of burgeoning, in this branching out and embodiment ye are earth’s darkness made manifest! oh hand, tingling, touching, fondling, embracing, oh finger and finger-tip, rough and gentle and soft, living flesh, the outermost surface of the soul’s darkness opened up in the lifted hands! (p. 18)

This goes on – this is only the first quarter of the passage, in the middle of a four-page paragraph – and it builds as it progresses. The insistent repetition is part of what makes this works: “leaf” throbs through, as does the modulation of “sensual” through “sensually” to “sensitive” and then “slender.” Broch’s style is maximalist: the pile of gerunds (“tingling, touching, fondling, embracing”) is typical of the book. The “ye” in the apostrophe in the second half seems to be an off note in the English, maybe pushing things too far; a dozen pages later, a passing peasant is overheard to say “Dat kind charm you’ll get from me” which reminds the reader the book was translated in 1945. There’s a 1946 essay about the translation of this novel in Geist and Zeitgeist; it’s rendered slightly hilarious because Broch evidently wrote it in the voice of his translator (“I simply want to tell you some of my experiences in translating The Death of Virgil and give you some of the ideas that came out of this, particularly from conversations with its author, Hermann Broch”); Untermeyer evidently refused to read it as her own. It’s not an especially helpful essay – Broch never inserted the demonstrative passages he intended to – but it does present the idea that the strange style of The Death of Virgil is in part related to bringing German sentence structure into English. I don’t speak German; to me, the book’s style reads as incredibly baroque in a way that doesn’t generally exist in English. (It might be worth noting in passage that Joshua Cohen seems to have borrowed the style for his earlier novels from Broch, which might explain the strange feeling of the prose of those books.)

The plot of the book, such as it is, hangs on Virgil’s deliberations about whether or not to burn the Aeneid before his death. Whether this would actually efface his work is left unclear: the text makes it clear that earlier sections of the book have already been copied, which makes it seem like Virgil would be choosing to leave the Aeneid unfinished rather than destroying it. That doesn’t make as nice a plot, of course. Virgil’s friends (perhaps intentionally similar to Job’s counselors) appear to try to convince him not to destroy the book; the third section is a long dialogue with Octavian, to whom the book is dedicated, who would like the book as tribute to his empire. Virgil doesn’t come off especially well (I’ll confess that I’ve always thought of the Aeneid as a cut-rate copy of Homer conceived to glorify an empire), and I’m not tremendously convinced that the argument is interesting. But the final section, where Virgil finally dies, is lovely; though weirdly here and elsewhere in the book, Virgil is made into the precursor of Christ that he was in the Middle Ages.

For me, the book survives on style: it’s a beautiful book, even though there are hints that the politics are a bit strange. I don’t know that I love it – I suspect I’ll go back to The Man without Qualities before this one – but this is a nice book to get lost in.

3 thoughts on “hermann broch, “the death of virgil””