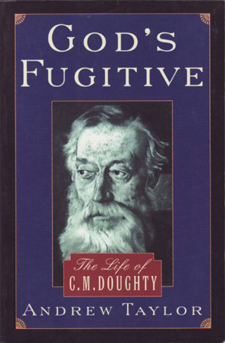 I’ve acquired, somehow, something of a collection of the work of Charles Montagu Doughty: both the full-length and abridged versions of Travels in Arabia Deserta (which I’ve been dipping in and out of for a while), a print-on-demand facsimile edition of the first volume of his epic The Dawn in Britain, a copy of his verse drama The Cliffs. He’s one of those people who pops up in interesting places: Henry Green, Laura Riding Jackson, and Guy Davenport were all interested in him; The Dawn in Britain in mentioned somewhat dismissively in The Pisan Cantos. I had some idea of Doughty but wanted something more, so I found a copy of this relatively recent biography of him; D. G. Hogarth’s The Life of Charles M. Doughty, which I might yet track down, came out in 1928, but I wanted something a little more recent for perspective. This is a serviceable biography; at three hundred pages, it doesn’t presume to be exhaustive, but it does provide a reasonable introduction to Doughty’s life and work, which is mostly what I wanted.

Doughty (1843–1926) seems to fit nicely into the mould of Victorian eccentric: he started out in geology, the most happening subject when he arrived in Cambridge, though he didn’t get particularly far with that. Doughty’s most endearing traits is his astonishing stubbornness: geology interested him precisely because of its increasing conflict with his Christian faith. Being part of the impoverished gentry, he took up traveling; he wound up in the Middle East with the idea of visiting the lands described in the Bible and found it not at all what he was expecting (shades of Melville’s Clarel) but found himself drawn deeper and deeper into it. He set off into Arabia with vague archeological ideas after being impressed with Petra; he ended up wandering the country for a few years. It is a wonder that he was not killed: his travels are known almost entirely through his own accounts, but it seems likely that the Bedouins he traveled with took him for some sort of holy fool. He refused to pretend to be Muslim, much less convert; at the same time, he didn’t presume to proselytize.

Returning to England, he found that most people were uninterested in his travels or his discoveries; relatively uncredentialed, he needed a book. He set to writing Arabia Deserta; as his youthful enthusiasm for geology had worn off, he’d been taken with Chaucer and Spencer, whose works he’d read again and again on his travels. The English language, he was convinced, had fallen into decadence since Spencer’s time; his writing, he hoped, might revive it. (Doughty would certainly have nothing to say to Fr. Rolfe, whose life he overlapped; but one might imagine a certain kinship with Rolfe’s project of creating his own dictionary of macaronic Italian with which to write Don Renato.) Doughty’s reforming spirit was lost, of course, on the publishing world, as well as upon, eventually, the reading public; it didn’t help that the original Arabia Deserta was 1200 pages long. Doughty then abandoned the Arab world entirely for poetry, trotting out an immense epic of the British clash with the Romans (the 30,000 line The Dawn in Britain), dramas in verse with subjects both Christian and anti-German (Adam Cast Forth, The Cliffs, The Clouds) and finally, in 1920, Mansoul, another long blank verse epic describing the journey of the Christian soul. Most of these didn’t make it past a first printing. Wanderings in Arabia Deserta, an abridged version of his first book, eventually found him a small, but devoted, audience; he was befriended by the young T. E. Lawrence, who made sure that he didn’t die indigent.

It’s hard to make sense of Doughty: he seems to have had a quarrel with the world, which makes his life entertaining reading. A reviewer suggested, for example, that The Cliffs might be derivative of Thomas Hardy’s The Dynasts; Doughty wrote to a friend:

The writer knows to his small malicious satisfaction that I had copied something from a book with the strange title Mr Hardy’s Dynasts. Not moving in the Literary World, nor reading the Literary Periodicals, I had never heard of the book or the author, and remain in my ignorance till now, and shall continue to do so . . . (p. 302)

There’s something fantastic about his sheer pigheadedness: his determination that he was right and the world was at fault. An earlier letter to a publisher accompanying the manuscript of The Dawn in Britain explains how he saw the literary world in 1905:

Modern poets’ work has fallen into neglect, and perhaps it may be merito. Where is that sincerity, knowledge, and right inspiration, which is required even in the humblest work of art? Where is that intimate knowledge of language, without which there can be only deciduous handiwork? . . . To speak of the present manuscript. This book is my life’s work, a continuation of Chaucer and of Spenser, such as conceivably they might have written in the present . . . (p. 262)

Doughty’s stubbornness seems to have been a dissatisfaction with the world: unhappy with England, he left for the Europe and then the Middle East; unhappy with the writing of the present, he abandoned it for the past. Though religious to his core, he rarely if ever attended church. Taylor only sketches the personal life of Doughty, but these details further complicate his picture: a bachelor for forty years, he married soon after his return to England, and seems to have led a contented life with his wife and two daughters. It’s hard to blame Taylor for this: Doughty seems to have been thoroughly his own man, inscrutable from outside. One might wish, however, for a little more focus on Doughty’s literary works past Arabia Deserta. Maybe they need their own book.