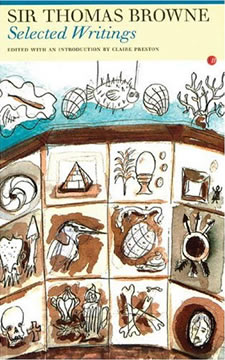 Thomas Browne has been an acknowledged hole in my reading for a while; I was reminded of this during my last reading of Moby-Dick. I’ve had the Claire Preston selection of Thomas Browne’s work on my shelf for a long time, but couldn’t, for whatever reason, find a way in; acquiring the C. A. Patrides compilation of his writing for Penguin, a bigger book, was an incentive, and I read the two against each other during boring stretches of highway driving in Libya; lack of distraction helped a great deal. I’m not sure why I should associate the desert with the baroque, but they do work well together.

Patrides provides the complete text of Browne’s major works (Religio Medici, Hydriotaphia, The Garden of Cyrus, A Letter to a Friend, and Christian Morals) along with a decent chunk of Pseudodoxia Epidemica, as well as some odds and ends. There’s a fair amount of repetition in this (most notably between A Letter to a Friend and Christian Morals), but it’s useful to be forced to re-read: Browne’s prose is slow and ruminative, and one invariably misses a great deal. After finishing sections in this, I turned to the Preston Selected Writings: Preston has included only Urn Burial in full, and elsewhere split Browne’s writing into stretches of a few pages, which are divided into thematic sections (“Religion,” focusing on Religio Medici; “Error,” from Pseudodoxia Epidemica; “Antiquarianism,” “Natural History,” “Signatures,” “Medicine,” “Advice”). There are some more entertaining selections from PE and some from Browne’s correspondence that aren’t included in the edition Patrides. (One is left wishing for a complete edition of Pseudodoxia Epidemica that isn’t a terrible Project Gutenberg text; an annotated edition would be ideal. Certainly other people must want this?) Preston’s notes aren’t quite as good as those of Patrides; and presenting Browne for short-attention spans seems to miss a good deal of what makes him interesting. But as before, it’s useful to re-read Browne, and going back and forth between the two editions was useful to me.

It’s hard for me to know what to make of Browne. The progression of works in the both of these edition (starting from Religio Medici, moving into Pseudodoxia Epidemica, or “Religion” to “Error” in the Preston) makes it clear that Browne was a devout Christian, who was using his religion as a base from which to try to understand the world. This is more clear in the Patrides, where the whole of Religio Medici is included: it’s not as abundantly clear from fragments of the text how seriously it seems to be intended. Pseudodoxia Epidemica almost seems a more recognizable text: Browne considers various popularly held errors and explains why they are wrong, though he clearly enjoys the erroneous stories more than he should; this, of course, is what makes the work interesting today. William Gass has been making the point for a while that when we ignore religious writing (baroque sermons, in particular), we miss a great deal of good prose; the point holds here. Browne’s specific religious beliefs are not especially interesting; but the way that he arrives at them still is. The essay’s rough going, as Browne works through his thought; but by the second half, when Browne turns in on himself, it becomes luminous and weirdly modern:

11. Now for my life, it is a miracle of thirty years, which to relate, were not a History, but a peece of Poetry, and would sound to common eares like a fable; for the world, I count it not an Inne, but an Hospitall, and a place, not to live, but to die in. The world that I regard is my selfe, it is the Microcosme of mine owne frame, that I cant mine eye on; for the other, I use it but like my Globe, and turne it round sometimes for my recreation. (Patrides, p. 153)

The same voice comes up in Hydriotaphia when Browne considers death; again it builds to a climax. I found myself strangely taken with The Garden of Cyrus, which makes only a minimal appearance in the Preston book: it’s not really a text which can be excerpted meaningfully. Browne starts with the idea of the quincunx; but the quincunx seems more a useful excuse for digressions than the mystical pattern he promises at the start. It’s a pleasant essay if one’s willing to wander along behind Browne; reading this, one immediately realizes from where Gass found his form for On Being Blue.

On the whole, I preferred the Patrides to the Preston; though the Preston includes excerpts from Browne’s correspondence that don’t appear in the Patrides. Here, for example, he instructs his son in how to care for an ostrich:

I believe you must be careful of your ostrich this return [of] cold weather, lest it perish by it being bred in so hot a country and perhaps not seen snow before or very seldom; so that I believe it must be kept under cover and have straw to sit upon and water set by it to take of both day and night; must have it observed how it sleepeth and whether not with the head ounder the wing, especially in cold weather; weather it be a watchful and quick-hearing bird like a goose, for it seems to be like a goose in many circumstances. It seems to eat anything that a goose will feed on, and like a goose to love the same green herbs and to delight in lettuce, endive, sorrel, etc. You will be much at a loss for herbs this winter, but you may have cheap and easy supply by cabbages, which I forgot to mention in my last . . . . (Preston, p. 134)

This Polonian voice doesn’t really appear in the Patrides collection (though it does include Samuel Johnson’s biographical sketch of Browne); the stridently casual tone nicely offsets the more measured voice of his essays. It makes me feel sorry that I didn’t start reading Browne long ago.