“Serious critics, of course, know that none of this is possible: in the first place, the Lyncée is an imaginary ship; secondly, Duchamp and Roussel never met. (Duchamp relates that he saw Roussel only once, in the Café La Régence, the one in the poem by César Vallejo, and that the author of Locus Solus was playing chess with a friend. ‘I am afraid I neglected to introduce myself,’ adds Duchamp.) But others do not allow these physical difficulties to obscure the truth of a more worthy reality. Not only did Duchamp and Roussel make the journey to [Buenos Aires] but they also met an echo from the future there, linked to them in ways that serious critics would likewise fail to credit. Juan Esteben Fassio prepared the ground by inventing in the heart of Buenos Aires a machine for reading the New Impressions of Africa during the same period when I, without knowing him, wrote Persio’s first monologues in The Winners, using a system of phonetic analogies inspired by Roussel; years later, Fassio attempted to fashion a new machine for reading Hopscotch, unaware that my most obsessive work during those years in Paris was with the obscure texts of Duchamp and the works of Roussel. A double impulse gradually converged upon the austral vertex where Roussel and Duchamp would meet once again in Buenos Aires, when an inventor and a writer – who perhaps years earlier had also watched each other across a cafe in the heart of the city, neglecting to introduce themselves – would meet through a machine conceived by the first to facilitate the reading of the second. If the Lyncée navigated the coasts of Africa, still some of its passengers reached our American shores, and the proof is in what follows, a short of joke designed to lead astray those who search for treasure with solemn faces.”

(Julio Cortázar, from “Of Another Bachelor Machine,” pp. 53–4 in Around the Day in Eighty Worlds.)

Long after your letter I received the text, which I’ve read over several times.

It is true I am indebted to Raymond Roussel for having enabled me, from 1912 on, to think of something else instead of retinal painting (André Breton will enlighten you as to this term, because we have discussed it together), but I must declare that I have not read In the Penal Colony, and only read the Metamorphosis a number of years ago.

Just to let you know the circumstantial events which led me to the Mariée.

So I was astonished at the parallelism which you have so clearly established.

The conclusions you have come to in the sphere of ‘inner significance’ interest me deeply even though I do not subscribe to them (except as far as the glass is concerned).

My intentions as a painter, which have nothing to do with the deep result, of which I cannot be conscious, were aimed at the problems of ‘aesthetic validity’ obtained principally through the abandonment of visual phenomena, both from the retinal and the anecdotal point of view.

As for the rest, I can tell you that the introduction of a ground theme explaining or provoking certain ‘acts’ of the Mariée and the bachelors, never came into my mind – but it is likely that my ancestors made me ‘speak’, like them, of what my grandchildren will also say.

(Quoted on p. 49 of Le macchine celibi/The Bachelor Machines, ed. Jean Clair & Harald Szeemann, following the contribution by Michel Carrouges. This letter appears to have been translated from French to Italian before being put into English.) 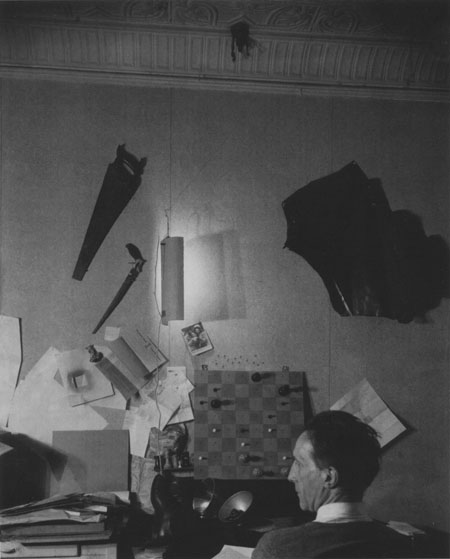 “In [Percy] Rainford’s original photography, Duchamp is seated at a desk, seen in profile with his face slightly overlapping a chessboard propped up against the wall. The chesmen are attached (glued?) to the board to illustrate the endgame developed by French avant-garde poet and playwright Raymond Roussel, who is considered one of Duchamp’s most important influences. [Frederick] Kiesler’s understanding of the importance of Roussel’s work for Duchamp’s creative process is evidenced by the inscription he added on the reverse of fold-out pages, ‘Marcel D.—born 1887—artiste-inventeur‘ and ‘R. Roussel—born 1877—artiste-inventeur,’ with symbols of the black and white kings positioned respictively nevxt to each name. While Kiesler, who was a keen chess player and frequent opponent of Duchamp, was surely familiar with his friend’s feelings about Roussel, Linda Henderson has suggested that the architect’s clear parallel between these two revolutionaries was drawn ‘undoubtedly with Duchamp’s help.’ At the far end of the flap on the left side of Kiesler’s triptych, the phrase ‘Fous, Cavaliers et Rois‘ (‘Fools, Knights and Kings’) is printed, along with small drawings of a jester and a knight. This was an appropriate use of chess characters on Kiesler’s part to summarize the multi-dimensional careers of Duchamp and Roussel.” 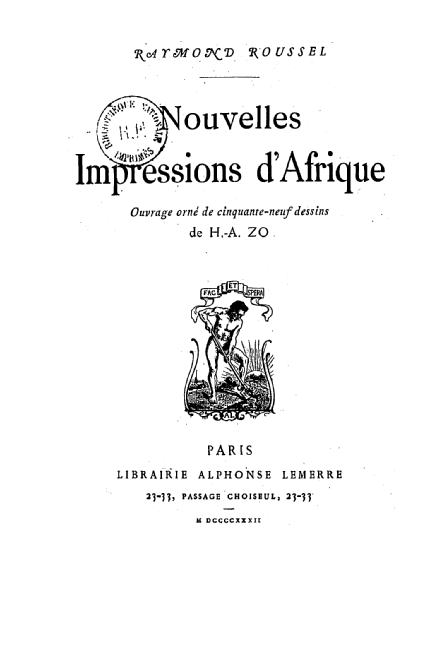 Raymond Roussel’s Nouvelles impressions d’Afrique, online as scans or as an OCRed PDF. 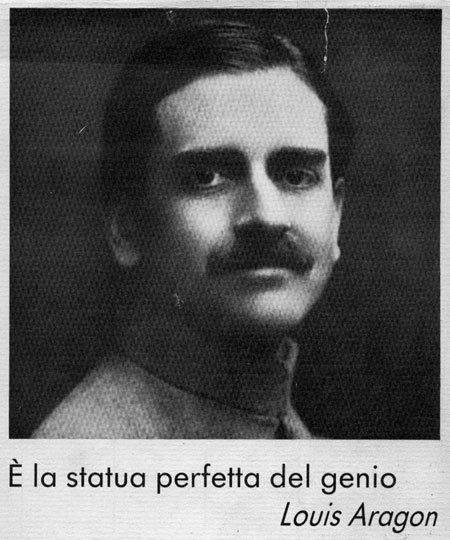 “From Vitrac’s account of his visit, it would appear that, by 1926, Roussel was already accustomed to receive visitors at Charlotte Dufrène’s apartment in the Rue Pierre-Charron, a practice which M. Leiris’s account might have led us to think Roussel only adopted later (perhaps because not until later, when he was living in a disreputable hotel, did he take to receiving even old friends at Mme. Dufrène’s). At any rate, although Roussel was apparently still resident with the Elchingens at Neuilly, Vitrac was received at ‘l’appartement d’une femme‘, and it was clearly in a turning off the Champs-Élysées, as the Rue Pîerre-Charron is. This little street is nowadays best known to men of letters as that in which stands the maison internationale of the P.E.N. Club, flanked on one side by a night club called Le Sexy and facing The Chickens Self, a restaurant no doubt specialising in barbecued chicken and operated on self-service principles.” 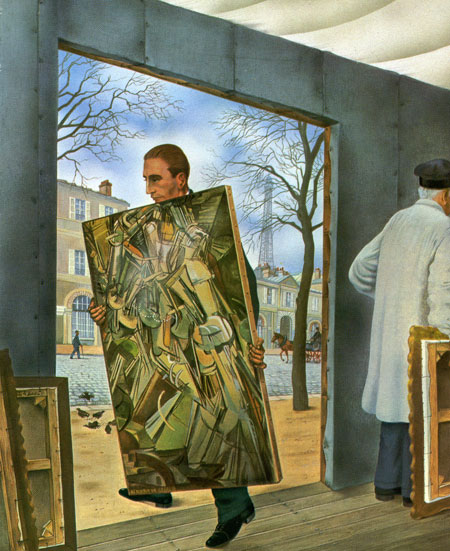 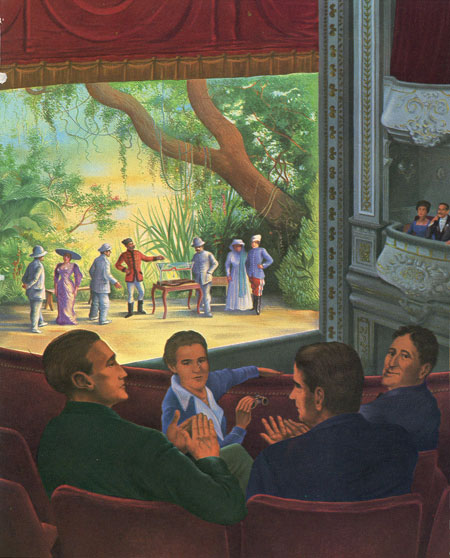